The town that made Ron MacLean famous is the stop this week for Rogers Hometown Hockey. With Red Deer, Alberta, a city where the now famous national broadcaster honed many of his skills of the interview and  developed his talent for the years ahead, serving as the stop before a journey to the coast to Prince Rupert for the host, his co-host Tara Slone and the entire production team.

One wonders if at that time, Mr. MacLean thought that being part of a season long caravan to celebrate hockey from coast to coast to coast was in his future, but when the Big Rigs roll out of Red Deer on Monday, the long time Hockey Night in Canada fixture and Ms. Slone will be digging into the research notes for stop number ten on the 2019-20 calendar.

Already the City of Prince Rupert has been busy showcasing the event with calls for decorated businesses and searches for Super Fans, with the organizing group behind the event now having released the schedule of events for the two nights of December 7 and 8 that will put Prince Rupert in the national spotlight.

Once the Rogers team have set up their broadcast location and unpacked all the treasures that come along with them at the Jim Ciccone Civic Centre, North Coast residents will have a chance to explore all that they have to offer as the noon hour arrives.

Starting out with a chance to view the Stanley Cup, pick up some autographs with NHL alumni Dwayne Roloson and Kirk McLean,  as well to play some trivia and take in some music from the Dearly Departed and that's just a few of the plans for Saturday. 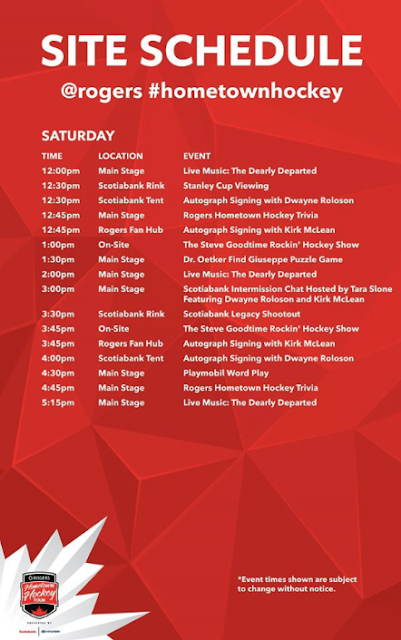 Sunday is broadcast day with the Oilers and Sabres making for the featured attraction from Edmonton set to be shown on the video screen, as the fun continues at the parking lot at the Jim Ciccone Civic Centre.

While the game is not until later in the day, the festivities launch at Noon hour Sunday, with music from Triple Bypass, return appearances for Mr. Roloson and Mr. McLean and much more all taking us to the set at 4:30 when Ron MacLean and Tara Sloan broadcast live from Prince Rupert. 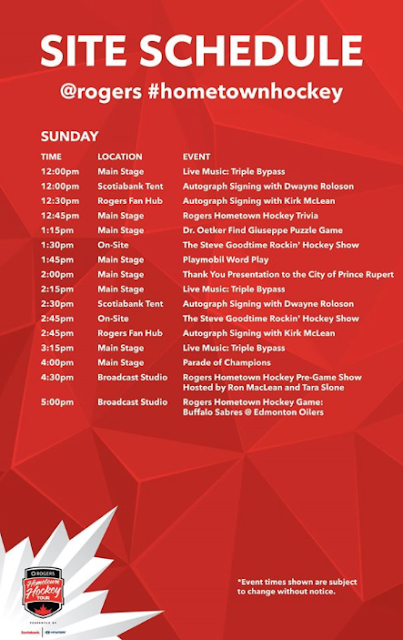 You can keep up with any updates to the weekend programming for December 7th and 8th from the Facebook page created for the Hometown Hockey event in Prince Rupert.

To look back at some of the plans along the way towards next weekend, see our archive page here.
Posted by . at 4:11 PM