The November meeting for School District 52 covered a range of themes, from a look at a recent trip to Vancouver for the BC Student Voice Event, to a new logo for Pacific Coast School and the introduction by Superintendent Irene LaPierre of new school plans for the 2019-20 school year.

Among some of the key note items that they took in from the event in Vancouver were sessions related to mental health, vaping and enhanced student learning. The travelling group also attended some icebreaker events and took in a visit to Science World.

Board Chair James Horne made note what they had learned from their trip and expressed interest in learning more about a program called the Foundry, which could be something that SD52 may show some interest in.

“The Board was impressed by the desire of the Student Voice group to invite students from neighbouring communities to their regional forum this Spring. We were also intrigued by the desire of the student group to bring the Foundry program to our community. The Board looks forward to receiving further information in order to have a discussion on lending our support to this initiative."

You can learn more about the Student Voice program here.

Trustees also reviewed and approved a pair of new logos for the city's Pacific Coast School which is located in the Ocean Centre Mall, the new look for the school will be featured on the door to the school, as well as on a line of clothing for students.

The approval came after the Aboriginal Education Council had reviewed the design and provide for its own approval previous.

As we noted back on November 20th, the new logo was a collaboration project for students, school staff and parents, with the new design provided by acclaimed artist Kelli Clifton, who is also a teacher with SD52.

Superintendent Irene LaPierre presented the highlights of the school plans for 2019-20 for trustees, noting that schools have used a range of data that has been compiled to put further focus on literacy, numeracy and social emotional learning.

The School plans can be reviewed here.

On November 8th, we made note of the Board Appointments for 2019-20, the trustees further divided up the vast list of other positions that required attention at the November meeting.

As part of their decisions, trustees took on liaison appointments with the various schools of the District, as well as to share work on a number of other committees.

The list of their new duties can be reviewed below: 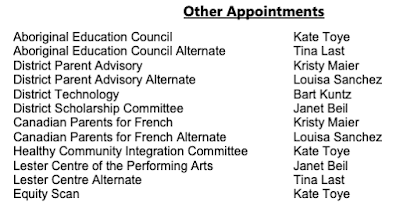 With December fast approaching, the Holiday season will soon be the focus with concerts to come as the countdown to the final day before the Winter break which will start on December 23rd and come to an end on January 3rd.

The Board next meets on December 10th

A look at some of the other notes from their November meeting can be found here.

For more items of interest related to education with SD52 see our archive here.

A wider overview of notes on education in the Northwest can be found here.
Posted by . at 10:01 AM

Email ThisBlogThis!Share to TwitterShare to FacebookShare to Pinterest
Labels: SD52 report for November