After a summer of stakeholder meetings to craft the vision for the City into next decade and beyond Redesign Rupert is ready to share the plans with the public, with Project Manager Ceilidh Marlow setting December 12th as the date for a showcase of what's to come.

At the December event, Redesign Rupert will review the path from the past to this point,  as well as to put some clear focus on the next ten years of community growth and development in Prince Rupert.

The project has come together with Redesign Rupert working in partnership with the City of Prince Rupert, Community Futures, the Prince Rupert Port Authority, DP World, Ray-Mont Logistics, and Ridley Terminals Inc.

As well the work has delivered for a collaborative year of working with all project partners and the broader community, providing for research and understanding of the biggest challenges facing residents of Prince Rupert.

Among the strategies to come from those sessions will be address a number of themes in Prince Rupert, including housing, social infrastructure, urban design, parks & recreation, environment & wilderness, downtown revitalization & retail, placemaking, and workforce recruitment.

Working with Redesign Rupert and its partners was renowned City Planner Larry Beasley, who has a significant number of accolades as part of his resume; with the planner having previously worked for the City of Vancouver, the he formed his own company Beasley and Associates and has taken on some quite impressive work.

Among some of his files, projects with Ottawa's National Capital Commission along with extensive work in the Middle East.

Prince Rupert Mayor Lee Brain made note of the opportunity to work with Mr. Beasley and to bring together the many elements that are working together on the Redesign Rupert project. 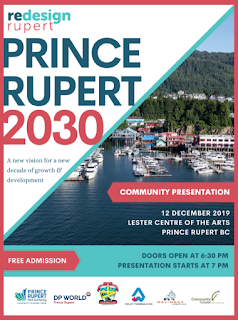 “It’s been an inspiring process to be a part of, and I want to thank our port partners, community groups, regional First Nations, and Larry Beasley’s design team for coming together to make this an all-encompassing community vision to work towards over the next decade. For our part as a City, the implementation of new policies and development incentives will be key to kick starting revitalization in areas such as the downtown, waterfront, housing, and more. That will only happen through ongoing community partnership and public engagement in the coming years to solidify the ideas and designs presented with the broader community.”

Among those partnerships,  Maksim Mihic, the General Manager of DP World (Canada) noted the transition underway in Prince Rupert and what the Redesign Rupert initiative offers the community towards the future.

“Prince Rupert is experiencing one of the most significant transitions in its history; it is quickly becoming a port city and one of the major players in trans-Pacific trade. With unprecedented economic growth in front of us, DP World sees the opportunity to accelerate the growth of the community and, at the same time, transition Prince Rupert to one of the most livable cities on the West Coast of North America.”

Some of the other major industrial partners in the region have also expressed their enthusiasm for the path ahead; with the Port of Prince Rupert, Ridley Terminals and Ray-Mont Logistics, along with Community Futures of the Pacific Northwest all making note of the potential of the Redesign program.

You can read their overviews from the information release issued today.

The December 12th presentation at the Lester Centre will get underway at 7 PM, admission to the event is Free.

You can review some of the past work from Redesign Rupert that has charted the course towards next months presentation from our archive page here.
Posted by . at 2:34 PM