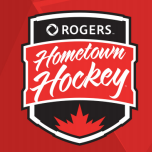 Minor hockey players in Prince Rupert looking for perhaps their big break in national broadcasting will be interested in a call for auditions of sorts for this weekend from Prince Rupert Minor Hockey.

With the local hockey organization looking to put together a sample of local talent for the upcoming Hometown Hockey broadcast in the city.

The Rogers Sunday night staple is on its way to Prince Rupert for December 8th and if you've seen the program which travels from community to community, one of the many highlights of the stopovers comes after the countrywide broadcast of the game of the week, is the selection of the three stars, which is done by local hockey players in the host community of the week.

The two lucky candidates get to share some on air time with hosts Ron MacLean and Tara Slone and will send out the names of the three stars from the Sabres/Oilers game of December 8th.

On Thursday night, by way of their Facebook page the PRMHA outlined the plan for local players to record their 30 second audition piece, with the players to give their name, their team, their number and position. Along with the answer to one question: What does hockey mean to you?

Once the Prince Rupert organizing team has put together the collection of players they will forward the package off to Rogers, who will select the two lucky Three Star Hosts for the night, one male player, one female. 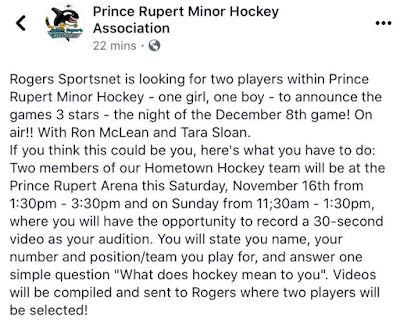 The Rogers Hometown Hockey crew roll into town on December 7th for the set up for the Sunday show on the eighth, their arrival coming on the same weekend as Prince Rupert launches the annual Winterfest  season.

As we noted on Wednesday, the City of Prince Rupert has jumped into the spirit of the upcoming visit by hosting a Business themed "Paint the Town Red" competition, looking to local businesses and industry to decorate their windows to show their Hockey spirit, with the best of the bunch set for a behind the scenes backstage tour of the Rogers Hometown Hockey production.

You can learn more about that initiative here.

For more items of note on Minor hockey across the Northwest see our archive page here.

Keep up to date with all the plans for Hometown Hockey's visit to Prince Rupert from our archive page here.