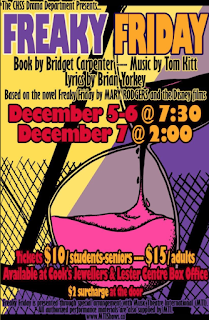 This years much anticipate production from Charles Hays Drama is but days away, with this weekend making for the last of the major rehearsals for the actors, actresses, band, production team and behind the scenes players for Freaky Friday.

Auditions for the performance began at the start of the school year and since then those assembled for the production have put in long hours towards learning lines, refining musical productions and creating the sets that will make for home for the three nights ahead.

The production is watched over as always by the long time head of Charles Hays Drama program and producer extraordinaire Alison O'Toole who is the Artistic Director.

The cast and crew of Charles Hays Students, along with band members led by Musical Director Kristy Tillman have all taken to their work with diligence on the production.

The story of an overworked Mother and daughter who magically swap bodies has roots first from a 1972 novel by Mary Rodgers, then as a film and stage adaptation from Disney, following a range of themes that may be quite familiar to the student cast.

Though how many may wish to swap places with their parents in real life, could make for some post showtime follow up and maybe a sequel.

Starting Thursday, the Lester Centre of the Arts will be transformed into the land of high school and all that the rivalry and travels of those in the cast will follow as they take to the stage.

The three night run begins with Thursday's Opening night at 7:30, followed by a Friday night show at the same time, the final performance for the show will come Saturday  afternoon at 2:00.

Tickets are 10 dollars for Students and Seniors, 15 dollars for Adults and are available now through the Lester Centre of the Arts Box Office or at Cooks Jeweller's.

Those who wait until showtime to attend will be charged a two dollar surcharge at the door.

The annual showcase from CHSS marks the start of the Prince Rupert holiday season, leading up to what is shaping up to be one of the busiest social weekends for the city in years.

You can keep up to date on all that's coming up from our Community Events archive page here.