City of Prince Rupert looks to paint the town red (with a bit of white) ... in honour of Rogers' Hometown Hockey arrival

The City of Prince Rupert is inviting the business the help celebrate the arrival of Roger's Hometown Hockey next month, with the City looking for a strong response to a Paint the Town Red and White Storefront Window Decorating Contest, with the city announcing the civic spirit program today through its website and social media streams.

Those who show their community spirit and go above and beyond to showcase the themes, will be entered in a draw and could become part of a back-stage tour of the Rogers Hometown Hockey production for the business and its staff members.

The successful business will tour the set from 1:30 to 2 PM and receive a swag bag for their efforts.

Some suggested themes for the window displays include:

To make sure your work is entered in the competition, participating businesses should post a photo to Facebook once they have their decorated windows in place, and be sure to add the hashtag #paintthetownred,  as well businesses should tag the photo with @CityofPR

For more information related to Roger's Hometown Hockey event contact one of the city's best known Hockey Moms and City of Prince Rupert Corporate Administrator Rosa Miller for more background on the business program for the paintthetownred event.

Find out more about the plans from the city's information statement here. 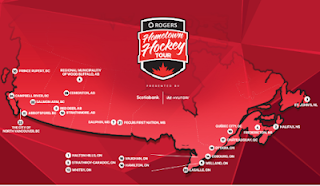 Prince Rupert learned that we were on the travel agenda for Ron MacLean and Tara Slone back in early September, when the announcement of the North Coast stop was announced as part of the season launch for the popular Roger's program.

The Rogers Hometown Hockey Weekend will actually kick off on the Saturday night December 7th, and will make for another bit of excitement for the city's annual Winterfest.

The focus of the weekend will be the Sunday night broadcast of the game between Edmonton and Buffalo, which is when Prince Rupert will get its latest opportunity for some national fame.

Keep up to date with all the plans for Hometown Hockey's visit to Prince Rupert from our archive page here.
Posted by . at 2:58 PM