With British Columbia the first to adopt UNDRIP, a new approach towards Indigenous engagement will get underway 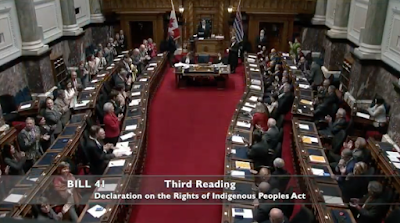 After a lengthy debate in past Legislature Sessions and five days of extensive discussion in Committee over the last week, the NDP government brought the UNDRIP declaration to the floor of the Legislature for a vote on Tuesday evening.

And while some Indigenous leaders had feared that the opposition Liberals might have been trying to run out the clock on the legislation, when the tally of votes came in, the UNDRIP declaration went through the House with no opposition as Bill 41- the Declaration of the Rights of Indigenous People became an Act and law in the province.

North Coast MLA Jennifer Rice celebrated the passage of the Bill into Legislation through her social media portal, as well as to post a link to the video of the moment of its passage in the House.

With the universal approval of Tuesday, British Columbia became a history maker, becoming the first Legislature in Canada to adopt the UNDRIP principles and turn them into provincial law.

The path towards adoption featured for the most part some thoughtful exchanges of comments, ideas, concerns and enthusiasm, with only a few instances of the broader partisan politics that sometimes infects the Legislature.

Upon the adoption of UNDRIP into law, Scott Fraser, Minister of Indigenous Relations and Reconciliation and a number of Indigenous leaders issued a joint-statement reflecting the historic moment that the province had  reached.

“The legislation establishes the United Nations Declaration on the Rights of Indigenous Peoples as the foundational framework for reconciliation in B.C., as called for by the Truth and Reconciliation Commission.

The provincial government developed Bill 41 in collaboration with the First Nations Leadership Council, which was acting on the direction of First Nations leaders throughout the province.

A commitment to adopting the Declaration is a component of the Confidence and Supply Agreement between the B.C. government and the BC Green Party caucus.

This legislation advances a path forward to true reconciliation for all of us in B.C. that will uphold Indigenous rights and create stronger communities, stable jobs and economic growth."

As part of the statement, which you can read in full here, the path forward from this point was outlined, with the key passage making note as to how future changes will be done in consultation, with Indigenous peoples and engagement for local government and other stakeholders.

“Any future changes to bring provincial laws into harmony with the UN Declaration will be done in consultation and collaboration with Indigenous peoples, with opportunities for engagement with local governments and stakeholders such as business and industry.

Changes won’t happen overnight – this will be a gradual, step-by-step process over time.

The development of an action plan – in collaboration with Indigenous peoples – with regular reporting to monitor progress will provide a transparent and accountable path forward on reconciliation in B.C."

Once the government moves forward towards implementing the new legislation and adapting it for use across the province, the government side of the House will need to ensure that residents of the province are fully informed on how the new approach will work.

As well as to explain to British Columbians how the changes may or may not impact on many elements of governance and how those issues and engagements may be handled differently from the past.

That process will come in the months to come as the path ahead becomes a little clearer.

For now the history books will show that it was British Columbia that took the first leap, looking to change the dynamic of the past and bridge the gaps that at times has been prevalent in Indigenous - government relations.

As the province follows up on the new legislation many other provinces, as well as the Federal government will be watching with much interest to see if the use of UNDRIP as part of the provincial structure will indeed make for significant change in the relationship between the government and Indigenous people.

Some of the reviews of the history making moment of Tuesday, can be examined below:

For a look at how both North Coast MLA Jennifer Rice, and Skeena MLA Ellis Ross addressed the theme of UNDRIP in the debate stage, see our Legislature archive pages below:


For a wider overview of the political scene in Victoria see our political Blog D'Arcy McGee.