The November meeting for North Coast Regional District is set for 7PM tonight as the representatives from the North Coast and Haida Gwaii gather at the Coastal Business Resource Centre on Second Avenue West to review a range of items ranging from Ferry concerns to future planning for recreation facilities in a number of area communities.

The ongoing issues related to the staffing of the Kuwna ferry on Route 26 between Skidegate and Aliford Bay will once agin make for some focus, as the Regional representatives review a letter from The Village of Queen Charlotte designed to get the attention of the Minister of Transportation in Victoria.

Earlier this month, we outlined some of the concerns from Haida Gwaii of those impacted by a reduced schedule from BC Ferries, who have now delayed their plans to increase the service between the two islands until next year.

Directors will also move forward with some initiatives coming out the recent Alternate Approval process for projects in Oona River and a number of other Electoral areas within the Regional District boundaries.

Some referrals on proposed wind power projects near Masset are also part of the work ahead on the evening for the Directors.

Members will also receive their supplier payments report for October, which outlines the Regional District purchases in recent months. 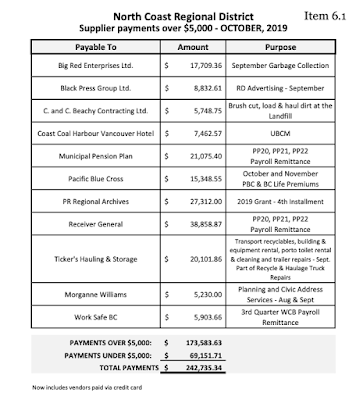 Some land referral themes, as well as conservancy and shoreline erosion notes make for a bit more of the work load for Friday night.

The Full Agenda for this evening is available here.

Regional Directors will also be hosting their own internal election process tonight, seeking election of the Chair for 2020, election of Vice-chair, followed by an address from both newly elected members.

For more items of note from Regional District see our archive page here.