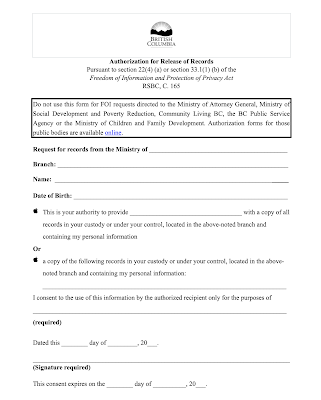 A steady drum beat of message making through the last week culled from a Freedom of Information Request revealed by the proponents of the Scrap the Tax Petition came to an end on Friday.

The daily snippets of the document having been used as the main thrust for the latest element of the ongoing campaign to gain signatures for the local initiative.

The proponents of the current petition used their Friday information release for another selected passage from the Report; the latest of five such excepts that started last Monday coming along with the introduction of the name of Peter Adams, who is noted as the Author of the 2019 financial review which they made newsworthy all last week. 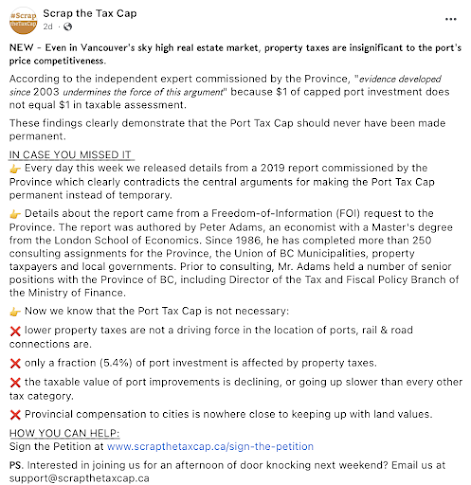 The latest update from the petition organizers was one that was also relayed by Mayor Lee Brain, making for the fourteenth social media message on the topic forwarded through the Mayor's Facebook pulpit since September 9th.

The frequent mentions for the FOI request in the last week, has developed a bit of a narrative towards how the awareness of the report is a new discovery of some sorts.

However the actual report launch was reported fairly extensively back in 2019 when it was introduced by the Provincial government.

That announcement of the review of the Port Cap issue was of some significance in 2019, which as we noted at the time, was a topic that should have been of some interest for the Mayor and Council members.

So it's somewhat curious as to how the Mayor framed the sudden revelation theme last week.

That might give some the impression that the Mayor was unaware of the study, though as noted previous it does appear to have been well recorded.

As one might say, it was in all the newspapers, or at least most of them.

That would mean that, Mayor Brain and the current Council membership did have three years to appeal to the Province to release the results as soon as possible, though there has been little mention of the Report over that period of time as part of any Regular Open City Council Discussions. 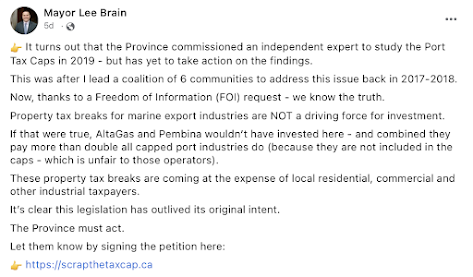 As it turns out ... Fortunately it would seem for petition organizers ... the awareness of the report came up at just the right moment for the Scrap the Tax Petition to offer up the "Breaking news" and "Bombshell findings" through the five days of message making.

And while as we have been often told in recent days,  it may not be a Council led initiative ... the Mayor has become the loudest and most effective cheerleader for the cause that the project could ever find.

The short bio provided on Friday on the Petition Social Media stream offers up an impressive CV For Mr. Adams, who if one does a Google search pops up in a number of civic related report projects through the last decade or so.

"The report was authored by Peter Adams, an economist with a Master's degree from the London School of Economics. Since 1986, he has completed more than 250 consulting assignments for the Province, the Union of BC Municipalities, property taxpayers and local governments. Prior to consulting, Mr. Adams held a number of senior positions with the Province of BC, including Director of the Tax and Fiscal Policy Branch of the Ministry of Finance. "-- From Scrap the Tax message from September 23

His body of work does appear to have been highlighted for some recognition by many Municipal governments and the UBCM during those years as well.

And clearly, the Report of note in this current instance would seem to be something that residents may want to have a look at, if only to gain a balanced view of his work, beyond the recent pull quotes from petition advocates gleaned from the FOI request.

That will only come with a chance to review the document in its full context.

As well, what would be most helpful to the current debate, would be to hear what the Provincial response to it may have been; as well as to whether the Prince Rupert Port Authority had any comments to provide towards the Report's conclusions.

The proponents of the petition may very well be spot on with all of their observations and rhetoric since the September 9th launch. Though without the benefit of access to the report that they are now basing their program of civic engagement on, the need for some balance on the topic and a chance to review all the facts is something to consider to this point.

And as this campaign has moved forward there seems to be a fair bit of information missing for a truly informed decision at the moment.

Something residents may want to keep in the back of their minds as the cacophony of political message making continues on into another week.

It's the kind of important fact of it all,  that could make for a conversation starter on your porch as the petition push continues with its advance with a door to door campaign set for October 2nd.

For some of the past notes on the petition issue see our Civic Taxation and Fees Archive which has served as the archive of notes since the launch earlier this month.