Housing, it's one of the largest issues facing the community, holding back the recruitment of workers and professionals, while also the beacon of warning over a growing concern over homelessness in the city.

The scope of the issue  was a key element of the mayor's June State of the City presentation,  the problem one which also made for one of the more energetic portions of Monday's Election Forum,

That as both the mayoralty and council candidates spoke to the topic, though with just thirty seconds to craft a reply on what appears to be a complicated tropic, the snippets of their talking points had little in the way of details to share.

The work of the current Council saw a flurry of civic legislation in the last year, a new OCP, revision of bylaws, Public hearings some at times controversial ones and much in the way of the vision for housing in the future.

However, in the here and now, and what came before over the last eight years, there's really little on the ground to show for what has been the dominant concern for a number of years.

If we turn back the clock a bit, not too many years ago, there were at least three significant areas of the city where we were seemingly on the cusp of some exciting development of new housing.

There is the Old Kanata School site off of Crestview, to the west side of the city off of Park leading up to Graham and on Drake Crescent off of Prince Rupert Boulevard.

Over the years, developers had come with proposals, land seemed ready to be developed or close to it and the drawings and plans looked like the start of some solutions.

Today, those three sites look pretty well much the same as they did when the proposals were first outlined, in some cases the developers long gone, or the plans in some deep hibernation.

Of the three, the one perhaps that was the greatest lost opportunity was the housing proposed for Kanata which was estimated to be between 100 to 200 units.

The proposal was not going to be particularly high end housing, but rather designed to address the lost housing of recent years for those not quite ready to become buyers, but still in need of some livable rental accommodation.

It was noted at that time,  that the development was LNG development dependant, though the need for housing today seems even worse than it was back during those heady days of LNG GO Plans.

The council of the day, however was not one that seemed to embrace many of the proposed LNG plans of the day, which one by one all faded from our view and wth that, so too did the prospect of some new housing stock arriving.

Still, those areas of land remain ready for development and would appear to fit the need in our current narrative of the need for housing to address a growing Port.

The only thing missing, is someone to develop them.

When the housing proposals pass through Council we hear a lot about what they will bring to the community; but when they don't work out, we rarely hear what happened and if there is a way to resolve whatever it was that sent the developers packing.

The same could be said for council initiatives like their plans for subdivisions and downtown residential construction, both of which gained a spotlight in the last year or so, but with little in the way of updates as to how it all may be coming along.

Monday night delivered a number of themes on the current situation, Muskeg seemingly the topic of note for the night as the largest impediment for building in Prince Rupert. Though it makes you wonder how the town ever was developed in the past to host a population of near 20,000 if muskeg has been the largest concern through time.

Some candidates observed that financing has become a problem, others noted of the city putting land up for sale in hopes of attracting development and how they would sell more.

A few solutions to the issue were offered,  but with a thirty second speed reading process, the voters really have no idea how any of their proposals would work.

One of them, is how the muskeg disposal program would work and how much it would cost.

Along with one theme that seemed popular for a few candidates on Monday. that of the City somehow becoming involved in some aspect of the financing of homes, an interesting observation for a community that keeps hearing of the financial challenges being faced by the civic government. 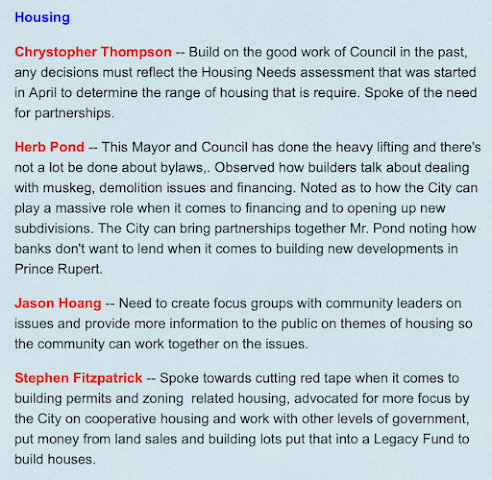 Candidates Fitzpatrick, Pond and Thompson all noted on partnerships and financial challenges and the three should deliver much more on their solutions towards housing for the voters to consider.

While Jason Hoang spoke of the need for Council to share more information with the public and on that point he was spot on, the lack of frequent updates and public discussion in the council chamber can lead to a sense that nothing seems to be getting done.

And while there have been some disappointing setbacks on the housing theme, there has been some success seen from the housing files as well.

Most of that generated by the province with its recent social and supportive builds on Park Avenue those on land provided by the City, along with the current work at Five Corners and the still be developed remake of the McKay Street area.

The latter a project that seems to have become stalled for a significant period of time now and something that might be in need of a bit of a push from council towards the province.

As well the City has provided land for a much anticipated Lax Kw'alaams housing project off of 11th Avenue East, though there has been little in the way of land clearing to date since it was approved following a contentious public hearing process.

The current council as noted at the Election Forum on Monday, is to be commended for setting up the pathway for housing for the future, that through the range of paper measures put in place to improve the housing approval process and create a more welcoming  atmosphere for housing.

The problem at the moment is, people can't live in houses on paper; sometimes folks just want to see some shovels go into the ground.

You can review some of the many themes on Housing over the last few years from our archive page here.

More notes on the election campaign can be reviewed here.