Prince Rupert's waterfront will be active exercise site next week, as an area from the Atlin Terminal to Northland Terminal takes on the role of response site for an Emergency Response training program.

With Tuesday September 20th making for a joint training opportunity for the Prince Rupert Fire/Rescue Department and members of the Prince Rupert Port Authority response program.  As result the area along the waterfront in the Cow Bay Area to Northland will be closed off to the public until the afternoon.

The public that may be in the waterfront area from the 9AM to 1PM period of the training exercise are asked to maintain a safe distance to allow for the emergency responders to work as required.

Both the Prince Rupert Port Authority and the City have provided some additional details on what will be taking place through their Social media streams.

The main theme one of awareness for the public that there will smoke generators and mannequins  in the water as part of the exercise, something that would surely be alarming for those wandering by without knowledge to the training program underway 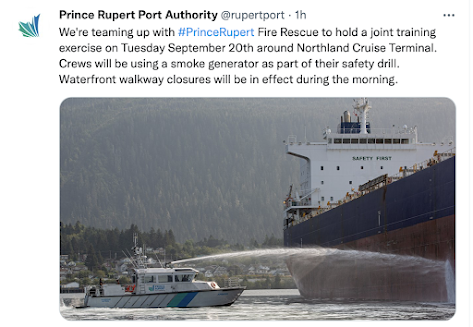 Follow both the Port and the City social media streams for updates as the exercise date gets near and the training program gets underway.

More notes on the work of Emergency Responders in the Northwest can be explored here.