There seems to have been a change in thinking for Alaska Marine Highway System officials when it comes to the Prince Rupert to Ketchikan run, with the just released Winter Schedule keeping the transit between communities on the water, with a limited number of sailings until the Spring.

As the schedule making was going through its Draft stage, the current of the discussion at the time had suggested that the run between the North Coast and Southeast Alaska would be a seasonal one, ending in the fall.

However, the good news for travellers between the British Columbia and Alaska Terminals came out of some revisions to the draft, that coming after feedback from those who travel aboard the Marine Highway service.

“We heard from our communities, and we’re listening. We adjusted the Winter schedule based on the feedback received and will keep on working with Alaska’s coastal communities to minimize service disruptions.” -- DOT&PF Commissioner Ryan Anderson.

For the most part, the Schedule from October to March offers one sailing per month, with April featuring two sailings on the 13th and 20th.

The transits will take place by way of two vessels, the first the  MV Kennicott in the early months, with the Matanuska taking over the route in February through to April.

Passengers can book their sailing through this link to the AMHS website. 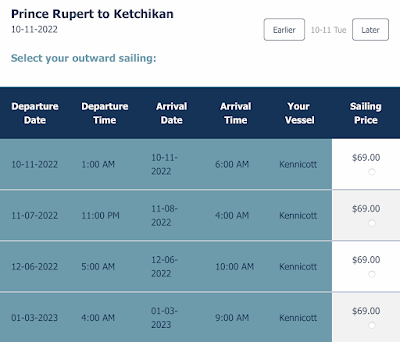 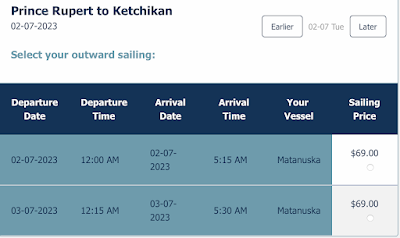 The Full announcement of the winter schedule and other themes related to the Alaska Marine Highway System can be reviewed here.
While it may be the bare minimum in service options at once a month, keeping the sailings in motion through the winter makes for a good indication that Prince Rupert remains a vital destination for the Alaska service.
The winter schedule makes for some welcome news that will bring additional commerce for the community through the off tourism season for both the hospitality and retail sector.
With the Winter schedule now set, the work on the Spring Schedule will now move forward and perhaps hopes from the North Coast of an increase in frequency to come for 2023.
More notes on marine transportation on the North Coast and Southeast Alaska can be explored from our archive page.
Posted by . at 12:14 PM