Prince George saw the start last week  towards the creation of an alternative fuel source terminal , a facility focused on changing how truck fleet owners fuel their vehicles and one that will put a low carbon fuel in the spotlight. 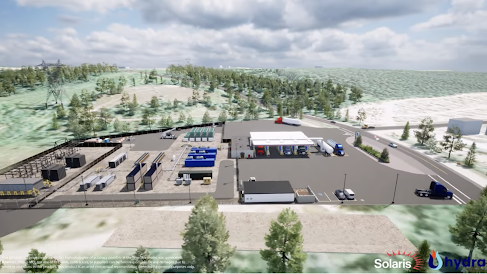 Hydra  Energy celebrated the first steps towards the construction of a Hydrogen facility on September 20th hosting the ground breaking at the site in South Prince George.
As they explained during the ceremony:
The new station and hydrogen production will be located on five acres, will produce 3,250 kilograms of hydrogen a day, and can refuel as quickly as diesel and up to 24 Hydra-converted trucks each hour across four bays.
The station’s low-carbon hydrogen is being produced from two on-site, 5-megawatt electrolysers with electricity coming from BC Hydro, B.C.’s main electricity utility with 31 hydroelectric facilities throughout the province.

Once the Prince George facility is up and running, the company has plans for additional locations for their fuelling stations, with some significant focus being directed towards the North Coast, once they have investors lined up for the expansion option. 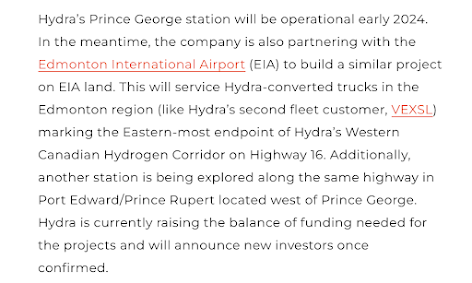 Making plans for an entry into the Prince Rupert market does make sense, considering the volume of truck traffic that services Port related facilities in the community.
As well, introducing the low carbon fuel to the region would serve to help the Prince Rupert Port Authority in its own environmental footprint and continue its efforts towards those improving on those efforts.
A wider overview of the Hydra facility and their future plans is available here.
Some background on their plans for Prince George and potential expansion to the west can be reviewed  below.
Prince George breaks ground on world's largest hydrogen refuelling station
Ground Broken on world's largest hydrogen refueling station
Hail Hydrogen (audio)
Hydra Energy breaks ground on Prince George Hydrogen heavy duty truck  refuelling station
Hydra Energy breaks ground
Hydra break ground on world's largest hydrogen refuelling station
Earlier this summer, we took note of some fact finding going on from the Prince Rupert Port Authority which is exploring prospects for the Hydrogen industry through the North Coast Gateway.
Trigon at Ridley Island also noted of some interest in Hydrogen options back in April.
Hydra's plans for a westward expansion, may fit into that window of opportunity for the future for the industry in the Prince Rupert Area.
With the interest in Hydrogen as a fuel whether for domestic or export use now on the rise, we'll chart any local developments through this archive.
Posted by . at 10:48 AM