SD52 Board meets tonight as Board election looms in October

The Trustees for SD52 meet tonight and the first Board meeting of the new school year offers a chance for parents and guardians to maybe take the measure of those incumbents seeking re-election in October and perhaps have the current roster of elected officials tie up a few loose ends from the last few years prior to voting day.

Tonight's session features a range of letters of correspondence to review, as well as a number of reports including notes on upcoming field trips, the enrolment for the District to date and how the school start up went for the first weeks of September.

Also on the Agenda for the night Finance and building committee updates, including a review of Capital projects for the year.

As well, Trustees have access to a report on some of the work over the summer to get the schools and other elements of Back to School underway. 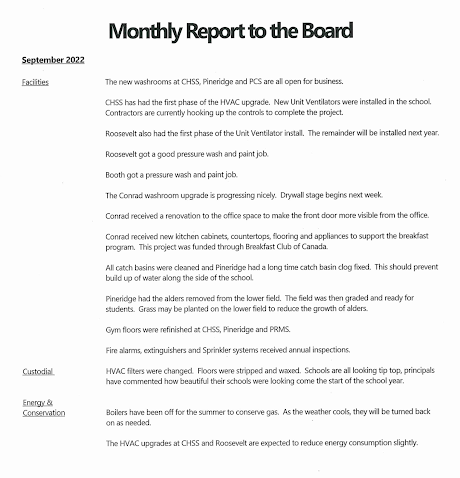 One item that parents and guardians might want to learn more about before the clock runs out of the current members of the Board,  is the progress for the much discussed but often delayed construction for a new Middle School.

A proposal that seems to have been caught in bureaucratic purgatory.

The Trustees haven't had much to say about that for a number of months, and with two of the current collective, Tina Last and Bart Kuntz stepping down in October, tonight may offer their last chance to share  some thoughts on how the long running replacement program seems to have lost its traction.

As well, Trustees may want to share some notes on the state of labour issues between the Board and PRDTU as the new school year gets underway.

The full overview of what is on the Agenda for this evening can be explored here.

The District appears to still be inclined to use the Zoom process for participation in the Board meeting, to see if you can still participate in this evening's session, contact Tamara Dickens for the Zoom link at tamara.dickens@sd52.bc.ca.

The September 20th Board meeting starts at 7PM with the zoom session coming from the Booth Building.

With the School District election less than month away the list of candidates is set, you can follow the developments towards the October 15th vote from our archive page here.
More notes on education in Prince Rupert can be reviewed from our archive page.
Posted by . at 2:49 PM