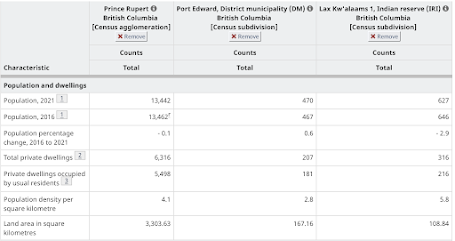 If there is a mass migration coming to Prince Rupert, the most recent Census has not offered up an indication that its underway just yet.

With the latest data from Stats Canada released this week indicating a decline in population for the city, while the District of Port Edward gained a slight boost.

Lax Kw'alaams has seen a decline from 2016 to 2021, the totals for the village for the most recent census listed at 627 compared to 646 five years ago.

The Metlakatla data from the survey listings was incomplete.

From the Prince Rupert numbers, the largest block of population is in the 15-64 year category listed at 8,880, while those residents over the age of 65 number at 2,215, at the other end of the age spectrum, 2,340 Rupertites are listed between 0 and 14 years of age.

Where we live offers an interesting study of the community at the moment:

With 3,245 living in single detached houses, 230 in semi detached housing, 310 in row houses, 635 living in a flat in a duplex, 965 in apartment buildings, while 100 live in what is described as movable dwellings. 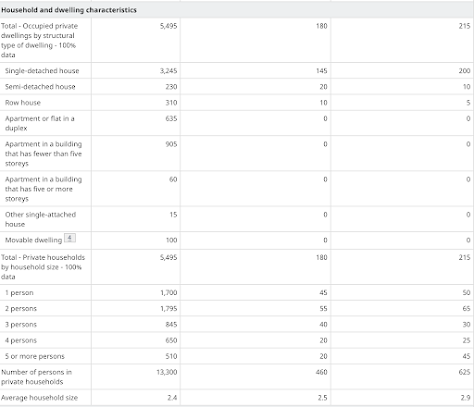 The largest volume of residents describe their personal situation as married or living common law with 5,950 respondents to the census checking off those boxes, that is almost an even split with those who stated that they are no married and not living common law which is noted at 5,150 residents.

English is the primary language for residents of the community, with 12, 475 from the census noting it as primary, French speakers number at 20, while non official languages are listed at 755, with 15 respondents specifying the use of Indigenous languages as used most often at home.

The data also notes that 190 respondents made note of some use of the Tsimshian language, which is the dominant First Nations language for this area.

Of non Indigenous languages, and those other than English and French:

Punjabi and Hindi are dominant at 485 and 225 repsectively, Vietnamese speakers number 415 while Tagalog of the Philippines is spoken by 215 residents.

The once dominant European languages appear to be dwindling away, with German spoken by 285 residents, Italian by 180 and Portuguese by 105 Rupertites.

Afrikaans, the language of many recent South African immigrants to the community counts for 80 respondents from the 2021 census.

As for the neighbouring communities, the numbers suggest growth for two of three.

You can do your own dig into the data with a review the full documentation from Stats Canada here.

Municipal themes for Prince Rupert can be reviewed through our archive page.