Skeena Bulkley Valley MP proud of work on Vote at 16 Legislation, disappointed at Liberals for not supporting initiative

Yesterday was vote day for a project that Skeena-Bulkley Valley MP Taylor Bachrach had put some significant time and effort towards, with his Vote at 16 private members bill up for consideration of the House of Commons.

And as we noted in a follow up to our preview of yesterday, the day would end in a bit of disappointment for the enthusiastic supporter for lowering the voting age to 16, as the proposal was defeated in Second Reading by a vote of 77 Yeas, but a larger count on the Nay side of 246 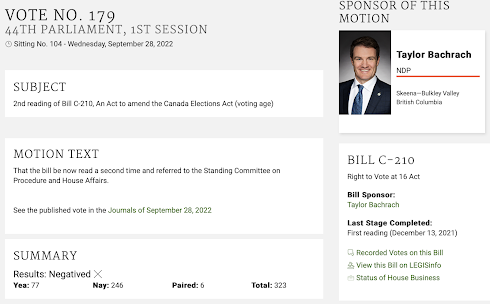 The party had the strongest support from the NDP, Bloc and Green Parties as well as a smattering of Liberals.

However the numbers of that support did not come close to the contrarian views of the majority of Liberals and Conservatives.

The MP offered a short statement on the outcome yesterday through his social media feed, praising the work of those that joined him in the quest and noting of his disappointment with the governing Liberals. 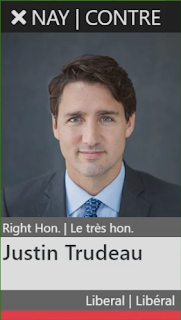 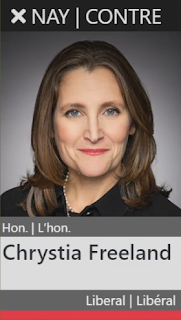 The Skeena-Bulkley Valley MP's bill was supported by his own leader Jagmeet Singh along with Bloc Québécois leader Jean Francois Blanchet
You can follow how the MP's voted starting at the 16:05 mark on the Parliamentary Video Archive for September 28th.

The archive pager for Bill C-210 can be reviewed here.

More notes from the House of Commons can be reviewed from our archive page.