Mayor Brain shifts focus on ScraptheTaxCap from tax justice for the city, to Saving the City!

The #ScraptheTaxCap petition program which launched September 9th,  is closing in on the conclusion of its third week of social media messaging.

One of the more recent of the dispatches outlining the plans in motion to launch a one day blitz of the community on Sunday, that to generate more signatures for the original call for tax fairness for the municipality from the province and Port.

However, for Prince Rupert Mayor Lee Brain, who has become the official social media relay station for the project, the travels around the city will be much more than just a collection of names, but a chance for the community to rally to his call to Save the City.

The use of the phrase that has become one of the ongoing narratives to his Mayoralty in recent years was included in his Social Media post of Wednesday.

Which is where he outlines how those wanting to help Save Rupert should consider signing up for a petition door knocking shift for Sunday. 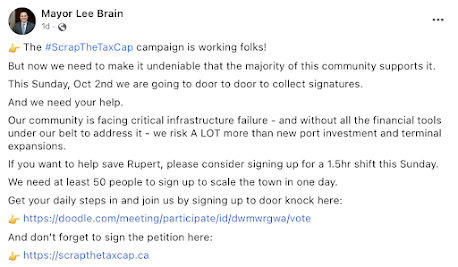 As part of the lead up to the city wide petition door knocking campaign, both the Scrap the Tax Cap  petition proponents and the Mayor have continued with their daily updates to their work.

The rolling archive of messaging highlighting a range of the themes from their initiative that have stoked the conversation and served to consume a significant portion of the discussion time  from Monday's Election forum.

You can review how the candidates for mayor and Council spoke the issue from our Election Forum pieces below:

Considering that all twelve of those seeking office on October 15th have  signed on to the campaign, you may have an opportunity to ask some of them to expand on the topic with you.

So should they knock on your door as part of the army of volunteers summoned by the Mayor for Sunday,  take the opportunity for a discussion of all the details and facts to the issue.

As well as to raise any questions you may have on the initiative before you sign or decline.

We've been following the #ScraptheTaxCap themes through our City Taxation and Fees archive page which features a number to stories to the theme of the last three weeks.