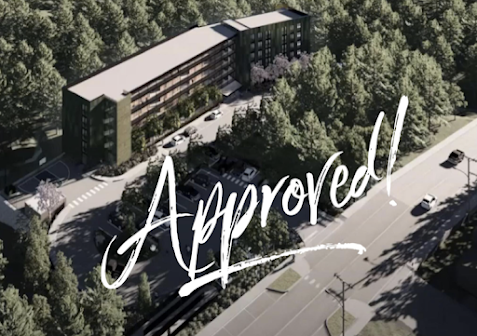 After close to two years since the concept of a Lax Kw'alaams led housing development in Prince Rupert was first noted at the Prince Rupert 2030 vision presentation of December 2019, the City of Prince Rupert gave its final approval on Monday night.

A decision that will mark the go ahead towards construction of the six storey apartment complex featuring 70 units of affordable family housing off of 11th Avenue East at Edwards Avenue on the city's east side.

Council members had only a few comments to share on the final act for the long running process while in the Council chamber, with Mayor Lee Brain making a quick turnaround from the end of the council session on Monday evening, hailing the approval through  a post on Social Media less than an hour later. 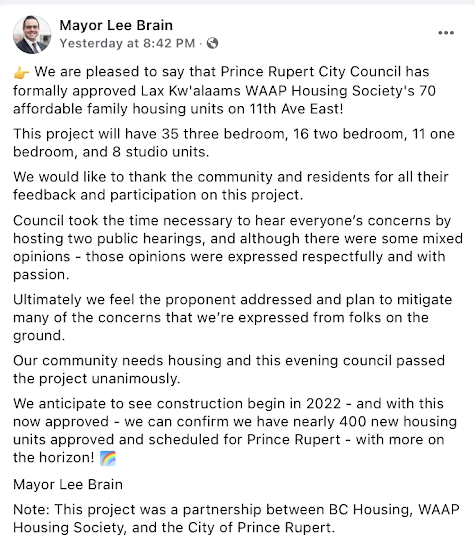 Missing from the mayor's notes on the successful push for affordable housing was any mention of North Coast MLA Jennifer Rice, who has been quite involved in the ongoing work to deliver new affordable housing in the community, though in the stream of the Mayor's Facebook page, she seemingly was destined to be a silent partner.

Ms. Rice did pay tribute to the work of Council on moving the rezoning forward that through her own Social Media feed on Tuesday, also noting of the funding provided by the BC Government through their Building BC Better program

Mr. Brain's commentary has featured some widespread applause from his loyal following, while a few commentators on his social media forum made it through the 'filters' for now, to weigh in with some contrarian notes on elements of the celebration.

Some contributors to the theme observed of the process that the city engaged in towards the application, in effect revisiting some of the concerns relayed by residents adjacent to the site and once again making note of some of the challenges of the location that was offered by the city to the Lax Kw'alaams housing group.

The Mayor's social media moment perhaps re-opening a few still raw feelings for those who spoke to the topic during the two public hearings and the lengthy period of time that the process consumed.

The full review of commentary pro and con from the Mayor's Social media feed can be explored here.

As for the Council Session, only a couple of Councillors made comment as the zoning approval came up for discussion on Monday evening.

Councillor Gurvinder Randhawa once again raised his concerns over traffic safety on 11th calling for a speed limit reduction, a theme the Mayor rebuffed for now, noting of the study done on traffic as part of the review of the project.

"I think we heard from their traffic consultant about a lot of the mitigation measures that they are putting in place, which I think are sufficient ... but what I will say is, that you know, 1) the project is up and running if we do approve it tonight, that's something we can consider at any time.  And I think you know you get a project moving forward and you see what the implications are and and if there needs to be adjustments then you can do that in the future. But our traffic consultants that presented their mitigations, I think they're world class recommendations, You know I don't want to over debate that, but I think that they put those mitigations into place for a reason and we can always adjust in the future if there's a serious issue there"  -- Mayor Lee Brain

Councillor Nick Adey, did take time to make mention of the neighbouring residents and the toll the discussion has taken on everyone involved in the process during the last few months.

"I've supported the motion, I'm in favour of it, but I'm doing so with a certain amount of ... trepidation I suppose because of the depth of the feelings that were expressed both for and against it.  I want to express my respect for those who have spoken out against it. Unfortunately sometimes decisions have to be made and I think based on everything I've heard this is to me the decision that best addresses a really deeply held priority that the city has in terms of housing"

Councillor Adey also made note of the traffic issues of the area and suggested Council may wish to review the situation in 2022 to see if there are other measures they can consider towards those concerns.

Councillor Cunningham expressed his view that he hopes that the plans for the screen of trees that is included in the design make it to the final build stage of the project.

"I hope when the project goes ahead, the screening of tree and that that were originally planned are left up. I know it's difficult when a project starts some trees have to come down that weren't planned. But just to shield the project from the rest of the neighbourhood and that because of its size and that I think it would be nice to  have as many trees left as possible"

You can review the short discussion towards the zoning approval from the City's Video Archive starting at the 46 minute mark of the Monday session.

While the process of reaching the final approval for the 11th Avenue apartments and maybe even the location itself will remain controversial; there is no doubt that the need for housing such as that which will be built on the selected site is much needed.

And in fact, there is a need for many more similar projects, or variations to the theme, required to try to address the lack of affordable housing that is currently the focus of much concern in the community.

A look back at the long and winding path that the project has taken to this point can be found from our 2030 Vision Plan archive page here, which tracks the scope of the plans from the very first mention of the Prince Rupert Vision plan presentation on to Monday night's final vote.

For more notes on the Monday session see our Council Timeline Feature here, while additional Council Discussion themes can be explored here.