For those who may have travel plans this weekend, some caution will be required as Environment Canada issues Weather Advisories for the North Coast Interior Region through to the Alberta border.

The warnings for northern interior travel come as two weather makers make their path towards the North Coast, the first one which will bring snow to inland areas, the second a more southerly flow which will bring extensive rain, either way the road conditions ahead could be treacherous at times.

The Winter Storm Warning for the North Coast Interior regions will bring up to 25 cm of snow for the Stewart area, followed by heavy rain.

Further Warnings are in place for Bulkley Valley and the Lakes District, Nechako and into Prince George.

There is no snow in the forecast for Prince Rupert,  and so far, no weather alerts have been issued, but the weekend and on into next week will be wet, with Rain  and wind the dominating feature of the next seven days.

It's anticipated that the Prince Rupert area will see up to 175mm of rain by Monday. 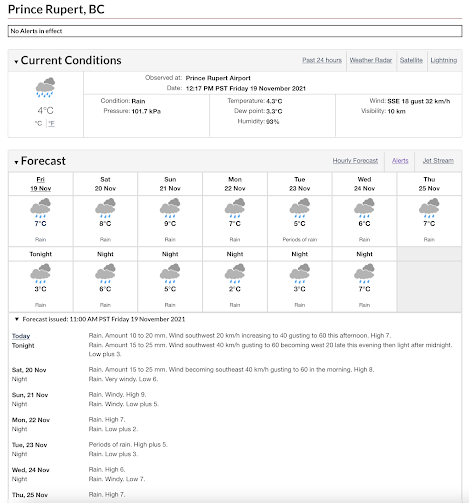 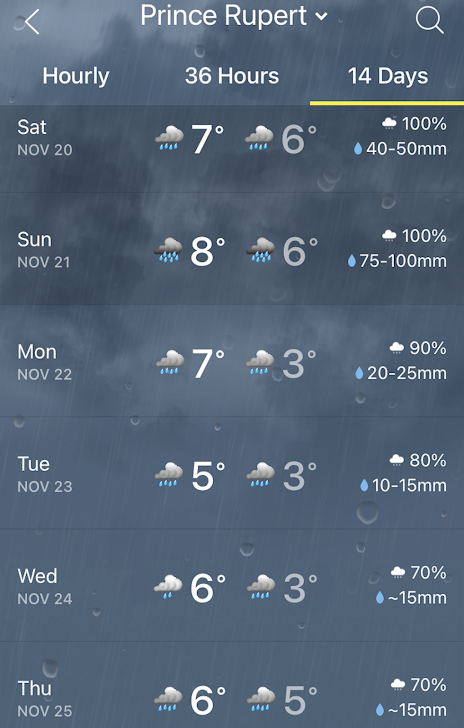 The approaching weather systems have already had an impact on the Marine weather forecast, with a STORM WARNING currently in effect for today, tonight and tomorrow.
That will bring winds of up to 50 knots from the south and seas of up to five metres by Saturday evening.
You can keep up to date on the evolving weather situation through the Environment Canada website.
Road information can be reviewed through the Drive BC website, or Drive BCNW twitter feed.
You can also access the regional Highway Camera network through our feature here.
You can review some of the past weather events for the Northwest from our archive page here.
Posted by . at 12:59 PM