Taylor Bachrach has engaged in the discussion over events taking place along the Coastal GasLink route through the territory of the Wet'suwet'en Nation, expressing his concern over how he views the conduct of the RCMP in their enforcement work related to the blockade of the worker camp last week.

The Skeena-Bulkley Valley MP did not speak to the blockade of the camp, or the ongoing dispute over the route of the Coastal GasLink pipeline during his time on the floor of the House of Commons during today's Question Period.

Focusing instead of the now much reviewed and discussed approach that the RCMP took to enforcing the courts instructions from past injunctions.

Mr. Bachrach called the enforcement action that of militarized police and asked Marco Mendicino  the Federal Minister of Public Safety who has oversight on the federal police force, what he plans to do about the issue.

"Last week militarized police once again descended on Wet'suwet'en territory, the world watched as unarmed Indigenous women were arrested at gunpoint and I've heard from dozens of Indigenous leaders who are horrified by what happened. To the Minster of responsible for the RCMP, do the events of November 19th reflect his view of how Canada should engage with Indigenous people on their lands and if not, what is he going to do to review RCMP conduct"

Minister Mendicino  observed that the government was concerns by some aspects of the RCMP operation in the region, but reminded the Skeena-Bulkley Valley MP that elected representatives do not direct operations. He did observe as to focus of the federal government would be to ensure that there is alignment between the responsibilities of the RCMP and that operation.

The question and answer session between Mr. Bacrach and Mendicino below:

The ongoing dispute in the Wet'suwet'en area is an ever evolving issue between a number of members of the First Nation who are against the pipeline route and the provincial government which has been vocal on the level of protest towards the project and how the BC NDP government has expressed a desire to seek a solution to the situation.

For the Deputy Premier, who is also Minister of Public Safety and Solitor General, with responsibilities over the RCMP in BC, the focus for a statement of November 15th, prior to the RCMP enforcement actions was on the nature of the blockades and a call at the time for de-escalation.

“Yesterday’s blockades of the Morice River Forest Service Road have put at risk emergency access and the delivery of critical services to more than 500 Coastal GasLink workers, and the good faith commitments made between the Office of the Wet’suwet’en and the Province of B.C. to develop a new relationship based on respect.  The B.C. government is calling on all those involved to de-escalate the current confrontation and move quickly to eliminate the blockades through peaceful means."

That statement, which you can review here, also outlined the history of the ongoing dispute, as well as the measures the provincial NDP government had taken previous to try to find a resolution to the situation.

Some of those same themes made it into the Stikine MLA's statement following the enforcement order actions of late last week. 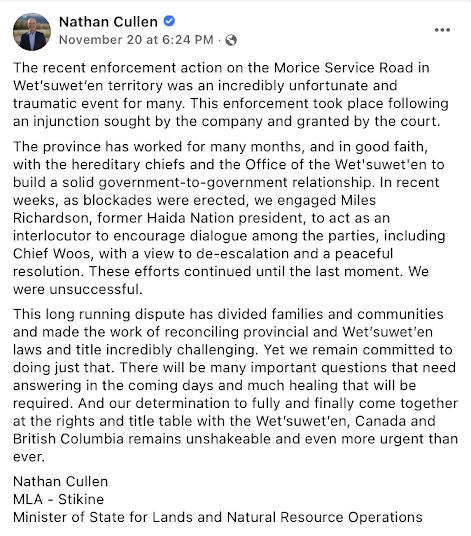 Mr. Cullen's statement, through his Facebook page has generated some significant discussion on the issue and is making for some notes of disappointment in the response from the Stikine MLA.

His commentary also covered a wider overview of the situation in the territory compared to that of the federal MP, who seems somewhat out of step with his fellow New Democrats at the provincial level for the moment.

More notes on the work of Mr. Bachrach in the House of Commons can be reviewed here.