The members of the Legislature put a wrap on their Fall session at 5:13 PM on Thursday afternoon, the final session of the week providing for the Royal Assent to a large volume of Legislation, including some controversial pieces related to Freedom of Information and Forestry to name a few that the opposition Liberals and Green Party had suggested needed much more discussion and oversight prior to passage.
Still, with a Majority government, the legislation will move forward at the pace desired by the BC NDP, and as Thursday closed, so too did any debate on the list of those legislative pieces that made for the fall schedule of government business. 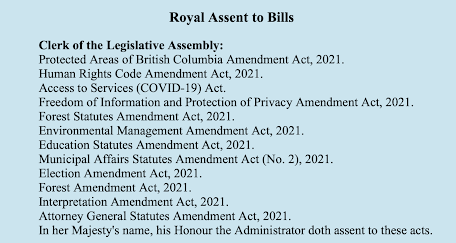 As for the participation of the three Northwest MLA's, the final week was one of limited mentions in the Hansard index, with only MLA's Ross and Cullen engaged in debate on the week, that on separate days, with the pair taking a very different view of the government's forests legislation.
Both MLA's took on positions when it came to the protests over Coastal GasLink in the Wet'suwet'en territory of the Northwest, a topic which federally was a theme for Skeena-Bulkley Valley MP Taylor Bachrach.
Skeena-Bulkley Valley MP calls for review of RCMP conduct on Wet'suwet'en territory
For the two Northwest MLA's their contributions to the discussion came through their social media streams over the last five days.
The evolving situation in the Wet'suwet'en was not a topic that was addressed, or made mention of this week by North Coast MLA Jennifer Rice, the third member of the Northwest MLA's contingent this week.
As for more on the recent week of work from the House, the four days unfolded as follows:

On the week, Ms Rice was not mentioned in the record for the week in the Legislature from November 22-25

Ms. Rice was not part of the line up of speakers for participation in the week of work in the Legislature.
The MLA did however relay a range of Government plans and policy announcements through her social media stream through the week.
The North Coast MLA is also a member of the Following committees:
Select Committee on Children and Youth
Ms. Rice serves as the Government's Parliamentary Secretary for Emergency Preparedness

For our readers from the Terrace-Kitimat region, Skeena MLA Ellis Ross  was mentioned once in the record for the week in the Legislature from November 22-25
On Tuesday, Mr. Ross joined in on the final hours of debate on the contentious changes to forestry legislation in the province.
Northwest MLA's offer two very different views on NDP government's forestry plans
Mr. Ross did have some internal BC Liberal business to attend to during the week, taking part in the Second of Liberal leadership debates to date.
The Skeena MLA clearly must be finding some traction for his quest of the party leadership, with Ross the target for many of the Liberal candidates in the Monday evening debate.
BC Liberal Debate gives Ellis Ross opportunity to address percolating controversy over vaccine comments; while taking on numerous challenges from other candidates
By week's end, Mr. Ross was gaining some notice from this open letter to Leonardro DiCaprio, published in the National Post, which challenged some of the actor/activist's themes on the Coastal GasLink project and Indigenous themes.
The Skeena MLA is not currently assigned to any Parliamentary committees
The Skeena MLA also addressed a range of themes  featured as part of the MLA's social media work.
*****************************************************************************

For our readers from the Bulkley Valley area, Stikine MLA Nathan Cullen  was mentioned  once  in the record for the week in the Legislature from November 22-25
The topic of discussion for Mr. Cullen in the Monday session of the Legislature was a strong defence of the NDP government's plans towards overhaul of the management of the province's forestry sector.
Northwest MLA's offer two very different views on NDP government's forestry plans
As the week progressed, he also used his social media stream to relay information and guidance on the ongoing emergency situation in the province, as well as other themes of government programs and policies.
The Stikine MLA is not currently assigned to any Parliamentary committees
Mr. Cullen serves as the Government's Minister of State for Lands and Natural Resource Operations

Thursday marked the final session for the Fall for the members of the Legislature, with the MLA's to return to their home ridings for the holiday period and on into February of 2022, when they make their way back to Victoria.
They departed Thursday evening with the best wishes from the Speaker until they meet again.

MLA's also participate in a number of Committee sessions scheduled through the week.