Over the course of the last week, residents in Prince Rupert, Port Edward and around the North Coast have received the annual letter of appeal from the Salvation Army, as Lieutenants Dawn and Geoff Butt outline the work of the Salvation Army in the community and highlight the particulars challenges of the holiday season for many residents of the Community and region.

The letter to the community notes of their work with the local Food Bank and soup kitchen which continues to serve Breakfast and Lunches for those in need in the Prince Rupert area.

Currently the staff and volunteers with the Salvation Army are making preparations for the annual Christmas Hamper campaign, a project which has seen a growing list of those requesting the hampers realized each year. 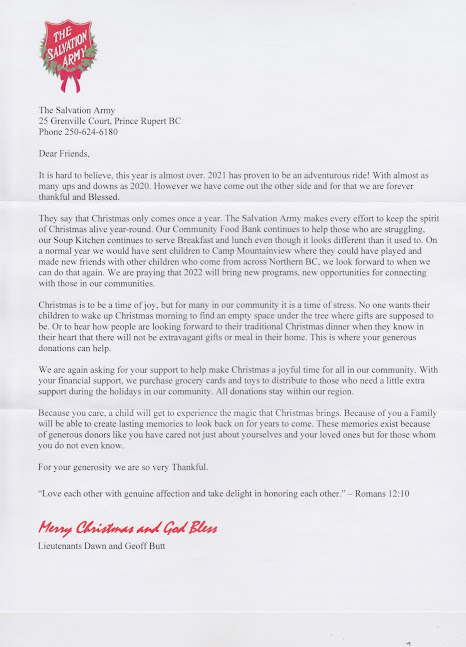 In addition to the home mailing campaign, the Prince Rupert's Salvation Army members  are making plans for the annual Kettle campaign, which this year will see kettles set up at Walmart in the Rupert Square Mall and at the BC Liquor store location at McBride and Second Avenue West.

Towards volunteering for a shift a notice from earlier this month outlines how you can contact Salvation Army officials to help out over the upcoming campaign. 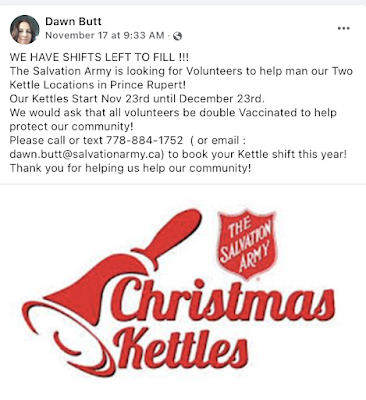 The Salvation Army also notes that those who wish to drop off a donation can make use of the black mailbox at the Grenville Court Salvation Army offices.

Follow the Prince Rupert Salvation Army Facebook page for updates on their plans through the next month.

More notes on Community themes can be reviewed from our archive page.