Another 14 days for BC's State of Emergency 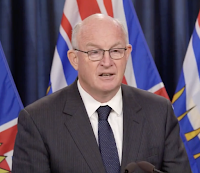 British Columbia will remain on a State of Emergency for another fourteen days, that as Deputy Premier and Public Safety Minister Mike Farnworth outlined the still precarious situation of the province's fuel supplies to the south and ongoing work to shore up and replace damaged infrastructure, all while another weather system makes its approach to the province tonight.

“People in our province have been affected by the devastating floods and while we’re making major progress in our recovery, we’re still in a volatile situation. I want to thank British Columbians for doing their part so that essential vehicles can continue to operate. The fuel conservation measures are working but with another storm on its way, we are extending the order to ensure that we prioritize emergency services for another two weeks.”

It's a range of measures that haven't had too much impact on the Northwest, with much of the area of concern located in the Southwest and Interior regions.

To put some of the situaaion into focus, Mr. Farnworth outlined both tally of properties facing either an evacuation order or alert the vast majority of them in Southern British Columbia.
Since the initial atmospheric river from Nov. 14-16, a series of storms has worsened existing flooding and created new flooding and landslides in southwestern B.C.
There are currently 3,606 properties on evacuation orders and 7,402 properties on evacuation alert. The fuel order applies to all fuel suppliers in the Lower Mainland-to-Hope region, the Sea-to-Sky region, Sunshine Coast, the Gulf Islands and Vancouver Island.
Essential vehicles will continue to have unrestricted access to fuel as required, using predominately commercial trucking gas stations (cardlock gas stations).
The Full statement from the province can be reviewed here.
The Information session with reporters of earlier today can be reviewed below:

Stikine MLA Nathan Cullen and North Coast MLA Jennifer Rice were also relaying some notes this day, noting that the Northwest is in store for another pacific system as well.

You can follow the latest weather updates from Environment Canada here.
Updates from the River Forecast Centre are available here.
More notes from the Legislature can be explored here.
Posted by . at 4:21 PM