A wicked wind this way did come

Wednesday's windstorm did deliver exactly as Environment Canada had suggested it might, with winds at time damaging rampaging around the city for much of the afternoon and into early evening, the Wind Warning that was issued on Tuesday providing a pretty accurate of the situation that evolved for about four to five hours of the day.

The day brought power bumps and outages, downed power lines and leaning power poles in some areas of the city including a wide swath of the downtown core; much of it chronicled through a range of the city's more popular Social media pages that came to life with each gust of wind.

The winds provided for a number of narratives from a number of sources, an unusual alert from the Prince Rupert Port Authority related to the status of the grounded MSC Altair, which broke loose from its mooring at the DP Terminal to drift across the harbour to a grounding near Digby, eventually moved to anchorage with the assist of tugs.

The City Closed the landfill site at Ridley Island at one PM and a few hours later issued a Community Safety Weather Warning advisory,  a helpful note, though relayed at four PM one that was a little less helpful than if it perhaps had come out a few hours earlier. 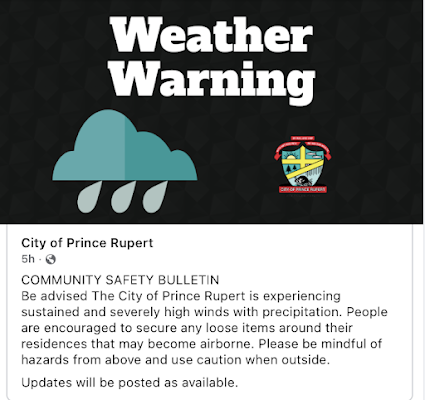 And indeed, Some homes suffered wind damage, as did a few commercial and industrial buildings, much of that roof or siding or items around the property related for the most part.

But by far the story that competed with the container ship updates on the afternoon was an evolving situation at the Prince Rupert Regional Hospital which saw some roof damage, but not quite the state of structural peril that began to circulate through media and social media postings as the afternoon moved towards evening. 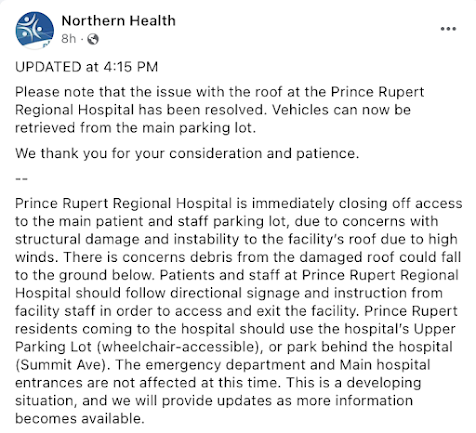 Such were some of the media reports that were making their way to the south and bouncing back to the North Coast, that relatives and friends were making calls to the north to check up on the region to see if things were as bad as was being reported. 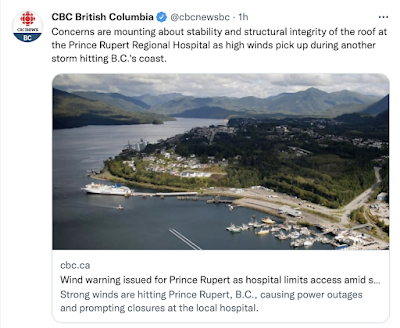 And while it was a wild afternoon, to paraphrase Mark Twain, reports of our demise have been greatly exaggerated.

By 8PM, while a Wind Warning was still in place,  the six hours of consistent winds had given way to only occasional gusts as the system tailed off into the North Coast interior regions.

For the Record, Environment Canada lifted the Wind Warning at 11:50PM

The fury of the afternoon leaving us to the daylight hours of the morning to come to make the rounds and see what else may have to be added to the list of damage from an active day of weather.

A good sampling of some of the photos and videos of the weather event can be found from the Facebook Page Prince Rupert Community Bulletin Board.

We'll compile the media reports of the day on our Weather Archive page as we move into Thursday, you can also review some of our past weather events from that archive.