BC Liberal Debate gives Ellis Ross opportunity to address percolating controversy over vaccine comments; while taking on numerous challenges from other candidates

The BC Liberals hosted another of their leadership debates on Monday evening, the six participants in the Leadership race taking part in discussion on a lane of themes over the course just over ninety minutes.

The session one with candidates Answering questions from the moderator, voters across the province and to challenge each other on themes of the night.

One item that made for some overview on the night was a recent appearance by Skeena MLA Ellis Ross on a Vancouver Island Political program where his comments on vaccine passports raised  a few eyes and caught the attention of NDP government MLA's, with MLA Grace Lore quick to her Social media feed to highlight Mr. Ross's podcast appearance. 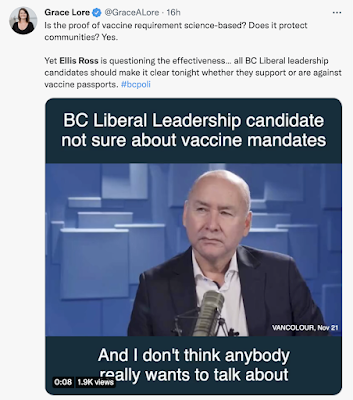 The full interview with the Skeena MLA can be viewed from the CHEK News program This is Vancolour YouTube stream here.

The vaccine topic came up again as part of Monday's debate, with candidate Kevin Falcon asking for some clarification from Mr. Ross.

In reply, the Skeena MLA observed that he supports the law of vaccine passports, noting of his own vaccine status and how what he was trying to a accomplish in his discussion was to highlight the impact that the passports are having on small businesses such as restaurants.

As well as to how it has stoked anger, remarking on the mixed messaging and how  it didn't need to happen if the government had handled the roll out of the program properly.

Over the course of the leadership debate, Ross appeared to be the political bullseye on the night as he looked to stake out some expanded turf in the leadership campaign, calling on the prospect of change for the BC Liberals that his leadership would bring should be be selected by the party in February.

Among some of the themes reviewed over the ninety minutes were climate change, with the Skeena MLA observing as to howe he would used some of the Carbon Tax in place to address the issues of the impacts of climate change as have been seen in the last week. He also noted of his work on emergency planning while Chief Councillor with the Haisla.

Attracting new a diverse range of candidates provided opportunity for Mr. Ross to note that such decisions are in the hands of the riding associations, though he shared  his view that when it comes to viewpoints he's not afraid of any ideology, adding that the party needs to have those wide discussions.

On Health Care, the need to expand on health care recruitment made for the Skeena MLA's theme, as he noted that when it comes to health care recruitment, there is a need to change regulations and rules, observing that there are many immigrant medical professionals who can't gain accreditation in the province.

Candidates were allowed to ask each other questions and Renee Merrifield was one of many to focus on Mr Ross in her case asking how he would build unity and leadership.

In reply, he recounted his past work and how he talks to everyone, hears all opinions, how he is defender of free speech and encourages it, he recounted how it was through conversation that he led the path to LNG for the Haisla Nation.

Towards team building, he also later would call on the leadership candidates to take a pledge to run in the next election regardless of the outcome of their leadership campaign.

On Environment issues, Ross noted of the past work of the BC Liberals on environmental assessments, adding how they can still do better, noting that with the NDP's approach that investment has shrunk in the province.

Candidate Michael Lee challenged some of Ellis Ross's environmental themes, asking for some clarification on his views on growing environmental concerns related to his putting energy infrastructure as a higher priority over electric cars.

The Skeena MLA noted of the need for a transition to cleaner energy, highlighting the need for infrastructure while the province transitions to such areas as solar and wind, adding that there is also a need now to transfer remote communities from diesel to natural gas before other elements of clean energy will be in place.

Val Litwin  spoke on themes of misinformation and appeared to challenge Ross on the theme that he views himself as an expert on Climate Change.

In reply, the Skeena MLA made note of his work of the past reviewing case law on aboriginal title on environmental laws, reviewing the BC Environmental Assessment Act as well as the Canadian Assessment Act and how he used that work to inform on his decisions and opinions both with the Haisla and as a member of the BC Liberals.

On Tourism, Mr. Ross noted how the BC NDP had mishandled the Cruise industry issues related to the COVID protocols and how it will now take a long time to rebuild those relationships. He also spoke to other areas where tourism can be expanded, talking along themes of an increase in marketing funding to rebuild the industry.

On how he would deliver change for British Columbians, Ross noted how he was a candidate who doesn't virtue signal, and doesn't say stuff just to get votes, and how there is a need to plan for today and towards the future to answer some of the concern and anger in the province.  Further to his approach on the topic he outlined what the province needs is leadership and people who understand the growing list of issues that British Columbians and Canadians are facing.

The Old Growth forest controversy and forest management made for a viewer supplied question.

To that theme, Ross reviewed the past management systems and how the current consultation program of the NDP is leaving too many people, such as forestry workers out of the discussion something he observes could decimate communities, noting how the province needs to be more resilient on forestry issues.

Towards those elements he highlighted how he had taken a previously NDP  held stronghold in two consecutive elections, how he doesn't back down and stands ready to take on the NDP programs and policies.

As  for Change he outlined how if voters were tired of virtue signalling and false promises that he sees those voters and how he is the change candidate they may be looking for.

The path of the debate and the focus that many of the candidates put on the candidacy of the Skeena MLA, would seem to suggest that he's moving upwards in the race and making a challenge towards the lead that Kevin Falcon is perceived to have.

The volume of challenges put to Rosson debate night also indicates that many of the candidates must be viewing his campaign as a success so far, one that may be leaving them to drop further off the pace that he and Falcon seem to have achieved.

Something that could make the next 26 days of party membership recruitment a frantic push to line up potential voters for the February leadership vote.

You can review the full presentation of the Monday night debate here or view it below.

More notes on the Liberal leadership race can be reviewed here.