The strong winds are going to make for a bit of work for BC Hydro workers this afternoon, with a trio of Hydro outages listed for Prince Rupert at the moment, the largest of the three affecting much of the downtown area at the moment.

Other areas that have been impacted are to the Northeast of the city and across the harbour at YPR and on towards Metlakatla and as far north as Lax Kw'alaams
There are also reports of power lines down around the Fulton and Sixth Avenue West areas.
Local Emergency responders are at those locations and residents are reminded to give any downed lines a wide berth and to contact BC Hydro if you have an issue in your area of the region.
Close to 640 customers have been affected by the power outage today.
You can access the latest updates on the power situation in the city from the BC Hydro website.
The heavy winds which are gusting at up to 110km./h  are expected to continue through the afternoon and into the evening.
Some cellular phone service has also been affected by the windstorm, with the Rogers network noting of a No Service status as of 3PM
The City of Prince Rupert also closed the Ridley Island Land fill site on Wednesday afternoon owing to th wind conditions. 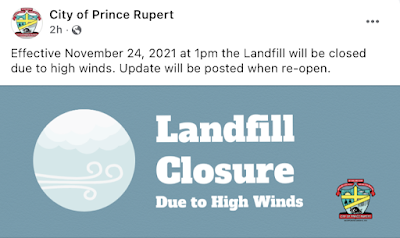 More notes on past weather situations can be explored here.
Posted by . at 3:22 PM