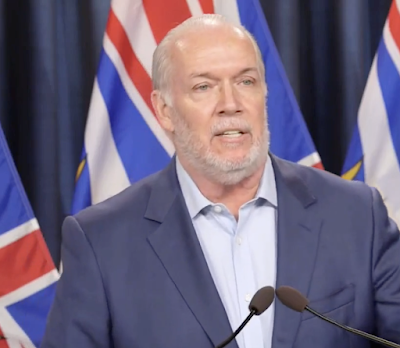 Premier Horgan took the centre stage this afternoon, as the Provincial government began to lay out a blueprint as to how they will be moving forward in response to the range of challenges ahead associated with the extreme weather of the weekend, with flooding and landslides that has left significant damage and disruption to much of southwestern British Columbia to the Interior.

The province's media availability today coming as concern was ramping up among British Columbians and reflected by the media, over a slow footed approach to the situation.

One that had left municipal government's seemingly on their own for the first few days now, the information session and follow up Q and A seeking to take that concern down a few notches, while setting in place the blue print for the recovery period ahead.

Mr. Horgan, who is currently undergoing treatment for cancer, had a strong resolve in his comments for the province, the first real response by the province since the storms hit.

In his comments, he confirmed one fatality related to the weekend emergency and observed that sadly more confirmations are expected. Mr. Horgan also noted of the call for assistance to the Federal government and offers of assistance from other provinces such as Alberta, Saskatchewan and Ontario.

"Yesterday I spoke to Prime Minister Trudeau, he offered to provide assistance where needed to help us respond to the immediate disaster as well as working with communities to rebuild going forward.

The province has now formally requested that deployment of federal resources, including the Armed Forces.  To assist with evacuations, management of supply chains and resupply chains, security in inundated areas, as well as restoration of safe drinking water and other logistics assistance"

As for the provincial infrastructure, the Premier made it clear that there is significant damage that will need to be addressed

"Multiple highways remain closed throughout BC. We're working diligently to assess the damage and make sure that we can get those supply roads back in shape as quickly as possible.

But the conditions are severe and it's essential that we work on these corridors in a way that makes safety our highest priority, and this means essential and emergency access will be limited in the days ahead

Already strained supply lines are at risk of greater destruction, Therefore, as of Noon today, the government of BC is declaring a State of Emergency.

The order will preserve basic access to services and supplies for communities across the province. We will bring in travel restrictions and ensure that transportation of essential goods and medical and emergency services are able to reach the communities that need them.

Please do not hoard items, what you need, your neighbours need as well. We're confident that we can restore our supply chains in a quick and orderly manner, provided we all act as we have been acting over the last two years.

Responding to challenges like this in a collaborative cooperative way to make sure that everyone can come through this in one piece. These are very challenging times"

Mr. Horgan also noted of the past challenges the province has faced in recent years and used the day's platform to speak to themes of climate change and the response in motion towards it.

"At almost every turn when we've hit crisis, British Columbians have rallied. They've rallied because of their resilience. And for those who understand and recognize that these events are increasing in regularity because of the effects of human caused climate change, there is hope in terms of the roadmap towards 2030 that we've developed here in British Columbia.

And the leadership that Canada is showing on the International stage to bring the other 7 billion souls on this planet to the position where we can understand that we need to act now, to make the changes in our community and inner economy that will protect us from these kinds of events in the future"

The Premier  brought support with him for today's session, with Deputy Premier and Public Safety Minister Mike Farnworth, Transportation Minister Rob Fleming and Agriculture Minister Lana Popham all on hand to speak to their portfolios.

Their contributions served to support the introduction of a Provincial State of Emergency which was declared at Noon today, with the Deputy Premier outlining what that means for the immediate future for the province.

“This provincewide declaration will help us with the challenges ahead as we recover from the utter devastation that’s been caused by this natural disaster. Getting our rail and roadways back up and in operation is a top priority, and the declaration will enable us to put the resources in place to make that happen.”

Infrastructure repair was also the focus for the Transportation Minister, with Mr. Fleming providing the overview of what will be the early focus for the work ahead.

“Our focus is on clearing, repairing and reopening roads to connect the Interior and the North to the Lower Mainland and Vancouver Island, to get our supply chains moving,” said Rob Fleming, Minister of Transportation and Infrastructure. “We are working closely with multiple partners to make this happen. It is a big job, but collectively we are up to the challenge and will get things opened up again just as soon as we possibly can.”

The scope of the Emergency orders will see the state of emergency in place initially for 14 days and may be extended or rescinded as necessary. The state of emergency applies to the whole province and ensures that federal, provincial and local resources can be delivered in a co-ordinated response to protect the public, which remains the provincial government's top priority.

Following the information portion of the presentation, the media had opportunity to raise a number of questions, many of them related to lack of alerts for the population that faced the evolving weather situation of the weekend, the concerns over supplies and hoarding across BC, as well as to how the province plans to address the range of issues that now make for the rebuild that will be required.

The complete statement on the Declaration of the State of Emergency can be explored here.

The full information session can be reviewed below:

Further notes from the Legislature can be reviewed  here.