Prince Rupert Council, if it wishes, gets another chance to join other Northwest Communities on Highway 16 shuttle bus program

The province of British Columbia is looking to continue on with its work in connecting the communities of the Northwest, having offered up over three million dollars towards transportation solutions for rural and remote communities, announcing the funding last week towards an ever evolving response to the gaps in community to community connection that have come with the demise of Greyhound service.

The additional funding of 3 million dollars for the program for Northern communities is being facilitated through the Northern Development Initiative Trust.

In their information statement of last week, the new funding outline was described as follows:

The new community shuttle bus grant money is part of a $7.9-million Safe Restart grant provided this year by the federal and provincial governments to help address the need for public transportation in rural and remote communities in northern B.C.

Applicants, including agencies that have previously received community shuttle bus funding, can seek a maximum of $100,000 for capital costs (such as a vehicle purchase), and operating costs to a maximum of $150,000. The total funding request per applicant cannot exceed $200,000.

NDIT has set aside approximately $3 million to help applicants with the costs of introducing, expanding or continuing passenger transportation services in its service area for as long as three years.
The organization began accepting applications to the new program on Nov. 15, 2021.
The northern community shuttle program provides crucial, community-led transportation support and will replace the existing community transportation grant program, which will end on March 31, 2022.
The NDIT's Joel McKay put the funding opportunity into focus by noting how it serves the North.
“Northern B.C. is a vast and vibrant place with residents living in many remote and rural communities. Dependable and affordable transportation options are necessary to allow people of all ages to safely travel to access health care, services, education and employment. Reliable transportation also plays a significant role in allowing people to attend social activities, reducing feelings of isolation and building a strong sense of community.”
The announcement of the lates round of funding now available for transportation in the North comes in the days following a report earlier this month from the Auditor General of British Columbia which called attention to ongoing challenges for travel in the region.

At the moment, travel by road east from Prince Rupert is a patchwork of options, from the BC Bush North, Northern Health Connections bus and a local twice a week shuttle operated by the Friendship House.

And while most days of the week end up covered off in one way or another, the actual ability to travel back and forth daily is rather limited.

That's something that has been addressed to a fashion from Terrace through to the Bulkley Valley and beyond, with municipal governments and Regional Districts working together to create a transit link of BC Transit service through the region. 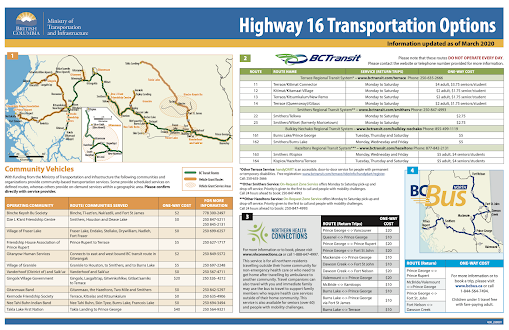 The City of Prince Rupert and Regional partners took a pass on the then percolating transportation funding plans back in 2016, citing availability of Greyhound and VIA Rail service at the team.

Their preference of five years ago a program to be developed with the North Coast Transition Society, an initiative which eventually became the Friendship House Shuttle bus.

With Prince Rupert Mayor Lee Brain making note of the city's thinking in 2016:

“Unfortunately in Prince Rupert’s context as a more isolated community and a service center for many rural island communities, this 2 or 3 times a week bus will not directly address the main concerns for our location regarding the Highway of Tears. However, we do understand that the proposed bus would work well in the Terrace, Hazelton and Smithers areas, where there are clusters of rural communities in close proximity,” said Mayor Lee Brain. “For us, supporting NCTS is a localized solution that can act in complement with improved transportation between communities inland.”

The City remained absent from the launch of the Community Shuttle program in 2017, and despite the abandonment of the Northwest by Greyhound and the less than reliable schedule of travel by VIA Rail, the North Coast continues to be the missing partner of the Northwest Community Transit program, something that was first noted in November  of 2017.

Following the launch of the shuttle program, one year later the province hailed it as having been well received by most communities along the Highway 16 corridor.

As for the newest funding, NDIT notes that it is designed for a range of applicants; from local government and First Nations to community groups , non profits and small to medium businesses.
Applications will be accepted until 5 p.m. (Pacific time) on Dec. 23, 2021. Funding decisions are anticipated in early 2022.
More items of note from the Legislature can be explored here.
Posted by . at 9:18 AM