How the BC Government has handled, or not handled in the view of the Opposition,  the extreme weather emergency of the last seven days, made for a contentious Question Period in the Thursday morning session of the Legislature. 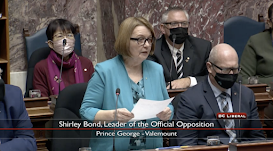 The tone of the debate was led off by Interim Liberal leader Shirley Bond, who expressed her disappointment in the handling of events over the last week."The NDP continually display a cavalier attitude when it comes to extreme events in our province and the challenges that British Columbians might face. During the heat dome alone, almost 600 frail, elderly British Columbians died.
What did the Premier say? "Fatalities happen." When British Columbians were getting swamped over the weekend, the government didn't do anything again. The Premier's response was disappointing. "It gets wet in November," he said, as if his government had absolutely no clue what was happening in our province.
Well, Washington state certainly did. In fact, Alberta did. Guess what they did as a result of that? They told their residents. They actually warned them, but not in British Columbia."

Ms. Bond's commentary was followed up on by BC Liberal MLA Todd Stone, who left no doubt as to how the NDP approach to crisis management has been viewed, with the Liberal MLA making his talking points in response to the commentary of Deputy Premier and Public Safety Minister Mike Farnworth.

Now, whether we're talking about hospitalizations or talking about road hazards, this government is failing when it comes to sharing critical information with British Columbians during an impending emergency.

Yesterday we saw the Premier shrug and say that "it gets wet in November", as if no one could see this disaster coming.

Except they did see it, with all due respect to the minister. They did see it in Alberta, and they saw it in Washington state.

This meant that folks only a couple of kilometres south of the U.S. border, south of Abbotsford, had 48 hours more warning than the people of British Columbia did.

NDP members have observed how the Liberals have taken some of the Premier's words out of context for their own purposes, accusing the main Opposition party of politicizing the ongoing situation.

That perception perhaps coming from the quick take to social media by the Liberals, who called out the government response. 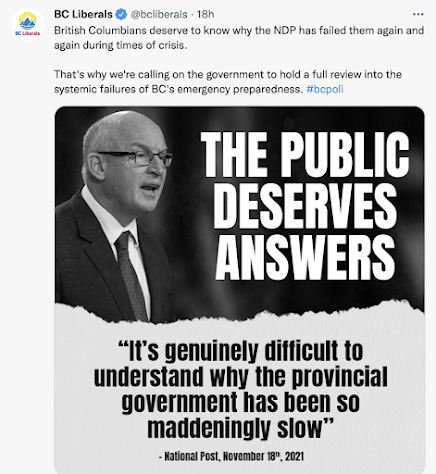 Though, there is quite a bit of merit in some of the Opposition commentary, particularly in advance warning which is an area where the Provincial government has stumbled in the past, both during the heat dome situation of the summer and the early days of the wildfires of the summer.

Noticeable towards that is the hesitant nature of using the Alert Ready program, a tool that we have tested a number of times in the past, but as of yet has never been put into practical use, a puzzling thing for those that have endured these emergency situations as they have evolved in the last year.

That too made for a topic for  Mr. Stone, as the Kamloops area MLA noted that BC is the only province which doesn't make use of an alert system to warn residents of impending danger.

Did the government use the alert system for the 2008 devastating wildfires? No, they didn't.

Did they use the alert system for the heat dome this summer that killed nearly 600 British Columbians? No, they didn't.

Did they use the alert system for the wildfires this summer? No, they didn't.

Did they use the alert system for these floods?

No, they didn't — the only province in the country not to use this advance warning system."

The Deputy Premier turned that question back on MLA Stone, noting that the BC Liberal government had not made use of the system either, then further advised of the plans for future use.

"And what I've also said in this House is that we will have in place the Alert Ready system, and we've committed to doing that for next spring.

We also have the ability, and as we worked with local communities to ensure that…. If it's needed in a particular area, as in Abbotsford the other night, we worked with them and had a text ready to hit send and to send it out ...

And working with local communities who also have their alert systems that they use to make sure, one, that there's no duplication and, second, that they're used in a way that also doesn't cause panic by working with first responders and the emergency coordinations on the ground on when the appropriate time to do it.
So hon. Member, we will be using next spring, next summer, the Alert Ready system, starting in the central Interior.
But we're going to make sure that it's done right."
Making mention of the local community aspect however, does serve to remind many that for the first few days of the current flooding and landslide emergencies, those local communities seemed very much on their own.
Local Mayors, Fire Chiefs and Police Chiefs were taking charge of the information narrative, community  volunteers taking to the many tasks arising and lending a hand when called upon.
As those themes evolved over the first few days of the situation, the Provincial Government did not provide for their first comprehensive information briefing until Wednesday; when the Premier hosted a one hour update that provided a snapshot of how the Provincial government viewed the evolving emergency.
That delay appears to be what was at the heart of the debate of Thursday, which also called attention to the current supply chain challenges and the panic buying that has been prevalent in many communities since Monday.
The opposition making note of the lack of proper warning, the delayed response, areas where most might suggest is an area where there is a need for improvement at the provincial level.
As part of their commentary on the government response the BC Liberal Caucus outlined three areas where immediate action is required. 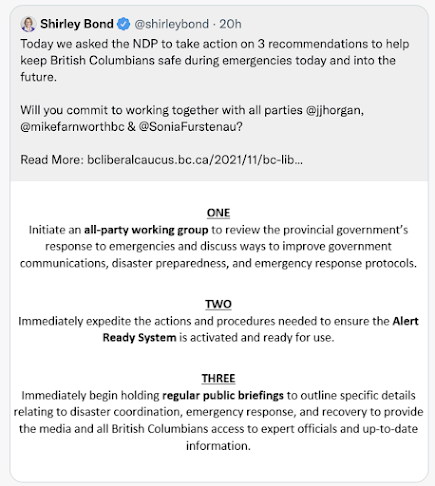 That call for action, one that was echoed by Green Party of BC leader Sonia Furstenau

And while the NDP may view it as politicizing the situation, the call for a full review into how the Emergency Preparedness planning failed the province this past week, is one which should be taken on quickly before the next dire situation arrives on our doorsteps.
The full Question Period back and forth can be explored from the Legislature Video Archive.
A look at the situation in the Fraser Valley and points east, as well as on Vancouver Island can be explored through our D'Arcy McGee portal and our Victoria Viewpoints feature.
More items of note from the Legislature can be explored here.
Posted by . at 12:03 PM