The push towards final approval of the BC Government's Forestry policies is moving forward in the BC Legislature this week, a controversial document that is making for some contentious discussion in the Chamber amid calls for the NDP government to slow down the pace for a wider overview.

With Cariboo North MLA, Coralee Oakes, a resident of a key forestry community in the province, speaking to the topic on Tuesday laying out fairly succinctly the BC Liberals concerns over the government's push this week.

"Scrutiny matters, I asked this government yesterday to pause and reflect on the consequences that they will have on British Columbians an dhow we rebuild,.I ask it again, pause, provide adequate time on Bill 28, approve this voice motion and allow this chamber, these MLA'S  to do our jobs and make sure we get it right, because British Columbians, they are counting on us -- MLA Coralee Oakes on Bill 28, the Forest Amendment Act 2021

So far and with only one more day left in the fall session, the NDP has not shown any inclination to heed that advice, with cabinet ministers and MLA's on the government side continuing to speak in support of the Bill. 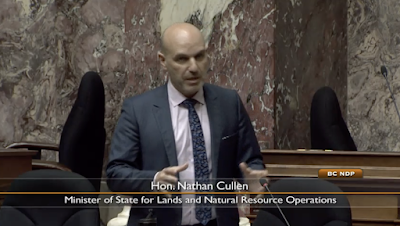 An indication as to the very different view of the legislation can be seen from the Northwest and the views of Stikine's Nathan Cullen and Skeena's Ellis Ross,  with Mr. Cullen speaking to the topic on Monday, laying out much of the NDP government's approach towards the forestry themes.

Along with the intentions paper, efforts around ancient and old-growth deferrals that this government has made are meant to describe a much brighter future. A different future, certainly, than forestry has at the time seen in the past, and for forest-friendly communities, as one mayor described to me the other day.

Not necessarily forestry-dependent, because many of our communities in the North, where I represent in Stikine, have done a great deal of effort over the last number of years and generations to diversify what happens, because we know economic models, particularly those that are resource-dependent, that place all of their eggs in one basket, are much more precarious.

The ability of the community to absorb price shocks, all the different challenges that we see to the resource sector over many generations, is much better when you have a number of legs for your economic stool to rest upon.

And A lot of the communities I represent — Hazelton, Smithers, Telkwa, further up north to the Yukon border and Alaska border — have done their level best to continue to diversify what it is that they do.

Now, this bill speaks to an environment, the forestry environment, to forests in general, that has increased in complexity over, certainly, the last number of years and also increased with respect to the fibre supply.

And I would hope there would be no disagreement in this House with respect to the impacts that have been happening to our forests, especially over the last two decades, I would say, perhaps starting with the pine beetle epidemic, which ruined millions upon millions of hectares of forests.

Some saw that as some of the early onset and effects of climate change that we just weren't experiencing. The very, very cold winters or at least parts of a cold winter that would normally, through a natural cycle, eliminate the pine beetle because it can't survive below a certain temperature — we just haven't been seeing those winters, broadly speaking, over the last number of years.

And we've seen the devastating effects of the red forests as far as the eye can see.

As for the elements of the Bill, Mr. Cullen noted how the proposed legislation will reposition the province and its management of the forestry sector and industry.

I think a principle and philosophical underpinning of this legislation as I was reading through the bill — and it is a very technical bill that, as we move through clause by clause, I know members of the opposition and perhaps some from this side as well will want to have some answers to questions — but is to reposition the province as the land manager.

That almost bears repeating. I'll repeat it: to reposition the province as the land manager.

Now, one would say: is the province not right now the land manager? Have we not always been? And that is actually not the case. In many cases that we've seen in past governments, when they've set up the tenure process for forestry companies to go out and harvest wood, the province has abdicated, has moved back from its role as the land manager trying to understand the greater impact and the sustainability of what it is that we're doing on the land base.

We saw under the previous government a number of moves that were meant to be friendly, as the government described them at the time, to the forestry industry, removing impediments around their decision-making, removing local communities from having impacts through land use planning processes — LRMPs, as they were sometimes called.

And there were other names for them in parts of the province, where we allowed local community interest groups, be they recreational groups, other economic participants, to have some say on what was happening within the landscape.

Again, not just for today but for many generations to come.

The Stikine MLA also outlined how the province plans to retain a fundamental role in the future of forestry in British Columbia.

Positioning the province as the land manager…. Repositioning us back, under this legislation, gives all of us, collectively, as British Columbians — not just this Legislature — and future governments a position that we should never have lost, I would argue.

Which is to understand the fundamental role that we have in representing the public when it comes to what we would hopefully all argue is the public good, the public asset, which is the resources of this province.

Now, coupling that — and this is a tool that's clearly been put in this toolbox — is the ability of the government to enter into agreements and land use discussions with the rights and title holders across the province when it comes to the forests.

We've already begun to do so, but it's always encumbered by the way that the Forest Act is currently constructed.

That the devolution of powers away from government, over previous Liberal governments, made it very difficult for us to enter into what anybody would see as a full and proper arrangement with First Nations people.

Now, as I mentioned at the beginning of this, this bill allows us to do a number of things that are required to achieve what I would hope would be shared and common goals across British Columbia when it comes to the forestry sector.

Towards the finish to his extensive defence of the government's forestry plans, Mr. Cullen offered up one final overview of how he views the Bill.

I believe in this Bill 28, we have an opportunity to do that, to continue the conversation, continuously improve and be courageous in what it is that we're doing and not simply turn our eyes away and say that it'll all be fine if lift no hand.

That's not the case. Too many families, too many communities have paid the price for governments unwilling to innovate, for governments that only saw one side of the ledger and thought that volume was always going to be the answer. It isn't.

The Video presentation from the Stikine MLA can be viewed from the Legislature Video Archive starting at the 5:55 PM mark of the Monday session. 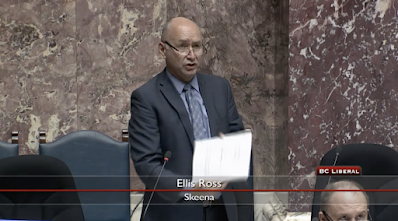 Skeena MLA Ellis Ross joined the discussion later in the Tuesday session, noting as to how two forestry initiatives were moving forward a the same time.

Observing as to how the government's rush to passage is not providing for a thorough overview of the document and it's impact on British Columbians and the forest economy.

What this side of the House is asking government is: could you at least take a breath, sit back for a while and consider the socioeconomic impacts this is going to have on families all across B.C.? Nobody can be expected to go through this kind of a document in two days and expect to come out with a fulsome understanding of what this is going to mean, not only to the people and families of British Columbia, but to communities — communities like Surrey, communities like Port McNeill.

Some of these communities can't reinvent themselves in a short period of time.  A lot of our communities, dare I say the province of British Columbia, was built on the backs of forestry.
My father was a logger. I was a logger. I was a hand logger.
To add to this, we're talking about Bill 28, specifically the amendment. But we're asking government to take a pause and do the consultation and do the studies on the impacts that this is going to have on British Columbians and communities.
But at the same time, what's happening here in the Legislature…. In another room right now, as we speak, there's a debate going on, on Bill 23, the Forests Statutes Amendment Act. Look at this thing.
This is 64 pages long. It's got 111 sections. And when we're talking about 111 sections, you've got to know that there are subsections.
To give you an idea of what we've kind of got to do down here, that's section 35, subsection (a), sub-subsection (0.1) and then sub-sub-subsection (a) underneath that. That's just one clause. A lot of this is definitions. It takes time to go through this.
But instead of taking the time, this debate is going to be shut down today at 5:15.
They're going to force closure. When you read this in the news, when they say they forced closure, what it means is that we're not going to debate this. Government does not want to debate this.
As part of his review of the Bill's proposals, Ross noted of the rushed nature of the government's process and the impact it would have both on those in the forestry sector and the communities that they live in and how in his view, MLA's were failing them.
In terms of what we're doing here today, the accountability — which that side of the House, the NDP, fought so hard for when they were the opposition — is now something that they ignore.
Members of the NDP government, when they were in opposition, actually condemned ramming through legislation like this.
And demanded fair process, or else something might get missed.
In this case here, that's what the official opposition is for. They're supposed to hold government accountable. They're supposed to go through, line by line, every single word in a document like this. That's not going to happen.
And now a lot of MLAs, including NDP MLAs, are going to have to go back and tell their constituents….
"Did you debate this bill fully? Did you fully consider the impact to my livelihood and my family?"
You're going to have to say, "No, I didn't, because we didn't debate it; we forced closure" — which is pretty sad.
You can review the full presentation from the Skeena MLA from the Legislature Video archive starting at just after the 4:42 PM portion of the session.
More notes on the work of the MLA's in Victoria can be reviewed below:
Stikine
Skeena
North Coast
A look at the developments from the Legislature can also be explored through our political blog D'Arcy McGee .
Posted by . at 1:04 PM