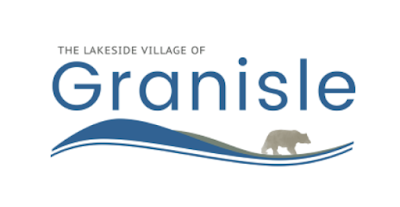 A former Prince Rupert City Councillor and one time contender for the Mayoralty of the City is making a return to the political scene, this time as a by-election winner in an election in the community of Granisle.

As the newspaper Houston Today tells the story, Ms. Bedard stepped up to fill a seat that became vacant when an incumbent passed away earlier this year, the by-election which took place earlier this month sent her to the Council chamber with a vote count of 61, a 34 vote margin over the next nearest contender. 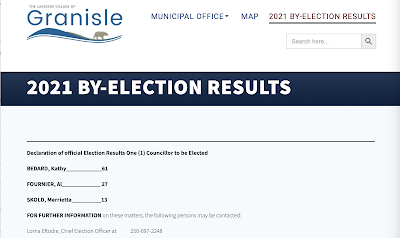 She and husband Ron, a former staffer with the District of Port Edward moved to the Granisle area in 2015 after many years on the North Coast.

Now retired, she does consultancy work and in an election preview in October, it was noted that from that work came a land use plan for the Village and a report on Seniors housing for the community.

Among some of Ms. Bedard's career paths while in Prince Rupert included work with the CBC, Northwest Community college (now Coast Mountain College), Hecate Strait Employment Development Centre and as a two term trustee with School District 52 followed by her time with City Councillor.

She first ran for Council in November of 1996, with elections the norm for the following campaigns for office at City Hall.

In 2011, she made a run for the City's Mayoralty, part of a three person race that saw Jack Mussallem take office during the turbulent times of the day, when the fate of Skeena at Watson Island  cast a large shadow over the city's operations. 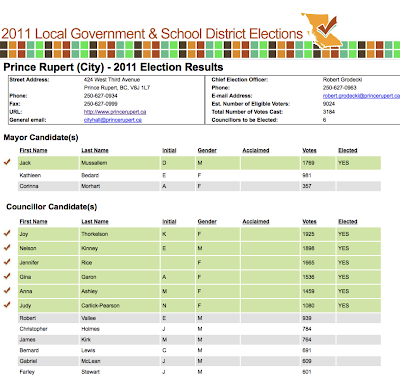 Of note from those days, was the composition of Prince Rupert City Council an era which saw the chamber one that was heavily slanted towards female councillors of the time,  the opposite of how voters cast ballots in the most recent election.

We explored that side story to the 2018 election campaign with this item.

Ms. Bedard will take her oath of office at the December 1st Village of Granisle Council session.

Like all municipal politicians in the province, if she's inclined, she'll be running for office again in the fall of 2022 when British Columbia hosts province wide Municipal elections.