MLA Cullen shares Stikine experiences as he speaks to Access to Services Bill to bring end to any protests at Hospitals, Schools 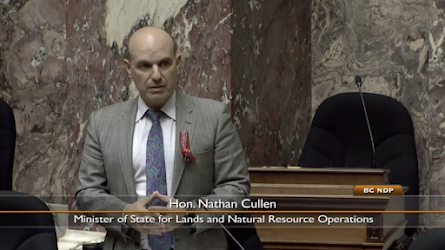 The NDP government has moved towards taking action on the recent burst of COVID related protests at community facilities as Hospitals and Schools, with David Eby, the Attorney General and Minister responsible for Housing introducing Bill 20-2021 the Access to Services Act.

The Bill would serve to restrict access by protesters to the following:

MLA's have taken up the Bill for Debate this week, and among those who have explored the goals of the legislation is Stikine MLA Nathan Cullen, who outlined a number of areas where he is in favour of the Bill and how it will be used.

The MLA picked up on the discussion as part of the second reading for the bill on Tuesday morning, addressing the recent times of discontent found in his own riding.

Bill 20 speaks specifically to this, and it's been enumerated a number of different ways here this afternoon so I won't spend a great deal of time on it. It is trying to find a way to create these bubble zones in legislation, in law, with very serious fines and potential of arrests associated with breaking what we are describing here today — breaking through the bubble zones to protect our schools, to protect hospitals, vaccine clinics.