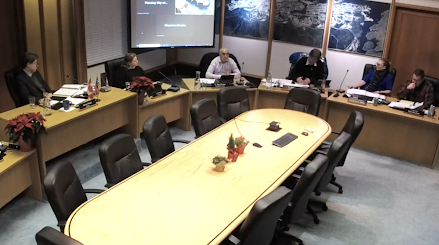 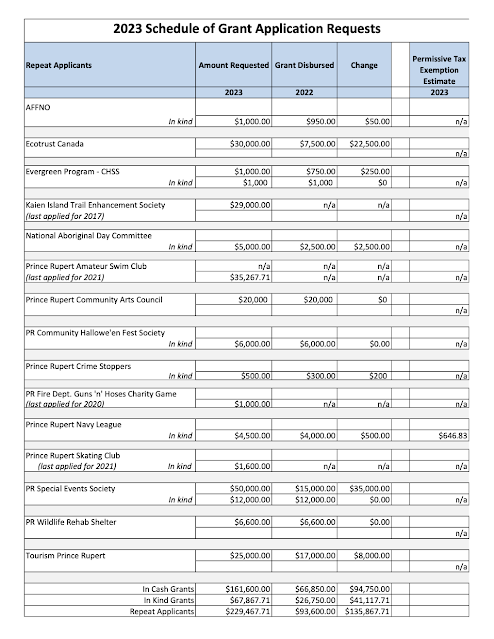 As for the final list, Mayor Pond relayed the decision making one item after another to wrap up Monday's Review, the dollar amount or in kind contribution by the city listed below:
$5,000 and below
Prince Rupert Crimestoppers $500 in kind
AFFNO -- $1,000 in kind
Prince Rupert Seniors Centre -- $1,000 cash
CHSS Evergreen Program -- $1,000 in cash, $1,000 in kind
Prince Rupert Fire Department Guns and Hoses -- $1,000 in kind
Prince Rupert Skating Club -- $1,600 in kind
National Aboriginal Day Committee -- $2,500 in kind
Prince Rupert Navy League  -- $4,500 in kind
$5,000 to $20,000
Prince Rupert HalloweenFest -- $6,000 in kind
Prince Rupert Wildlife Rehab Shelter -- $6,600 cash
Tourism Prince Rupert $17,000  cash
Prince Rupert Community Arts Council -- $20,0000
Prince Rupert Special Events Society -- $30,000 cash, $12, 000 in kind
Four applicants for 2023 did not receive approval for their requests
They included:
Prince Rupert Amateur Swim Club -- request of $35,267.71 -- 0 dollars awarded
Ecotrust Canada -- request of $30,000 -- 0 dollars awarded
Kaien Island Trail Enhancement Society -- request of $29,000 -- 0 dollars awarded
Prince Rupert Gymnastics Association -- request of $23,200 -- 0 dollars awarded
For a pair of applicants that did not find success in this year's application process, Councillor Nick Adey offered up some thoughts on how the future may unfold for them.
The councillor noting as to how both Ecotrust Canada and the Kaien Island Trail Enhancement Society efforts approach elements of the Official Community Plan.
"We should remember, that what they're objectives are,  fall very much within the scope of what have been articulated in the Official Community Plan, with respect to local food growth on one hand and Quality of life through trail enhancement in the case of the Trail Society.
So I'm not opposing where we are at with these motions, I do think we're stuck in the vise of what we can pay for and what we can't.
What I would like to do though is offer the thought that as we pursue the directions that are undertaken under the Official Community Plan that we be mindful that these two organizations fit very well within that and that over time there may be ways that we can support them.
Perhaps not in the same form as a Community Enhancement Grant, so I don't think that saying no to them at this point, is the same as saying no to them, is kind of what I'm saying" -- Councillor Nick Adey
The remainder of the Grant Applications, those funded by agreement or Special Conditions did not make for any discussion as part of the Monday session.
That funding information is listed below: 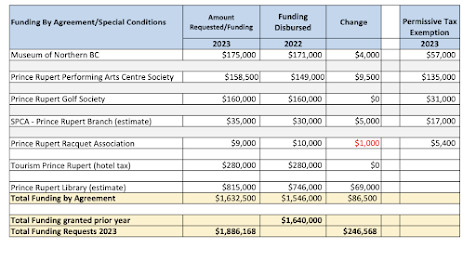 You can review the full discussion by the Council members from the City's Video Archive which was the first item on the Agenda following its adoption on the night.
More expansive notes from the Monday's Council Session can be explored through our Council Timeline Feature.
Further background on Council Discussion topics is available here.
Posted by . at 9:48 AM