Lighting fixtures swayed, furniture might have shifted and homes vibrated in the Prince Rupert area shortly before 1 am on Saturday morning as a 7.5 magnitude earthquake struck near the Alaska panhandle community of Craig, Alaska.

Originally recorded as a 7.7 magnitude temblor (it was downgraded following a review), the quake rumbled off the Alaska coast at 11:58 PM Alaska Time (12:58 BC) with reports of the quake being felt as far inland as Smithers, British Columbia.

Shortly after the earthquake was reported, the Region of the Pacific coast from Alaska down to Northern Vancouver Island was placed under a Tsunami Warning with a bulletin issued at 1201 Alaska Time from Palmer Alaska.

The first noticeable aftershock of 4.7 mg was recorded at 12:27 Alaska Time (1:27 BC). Subsequent aftershocks were recorded as follows: 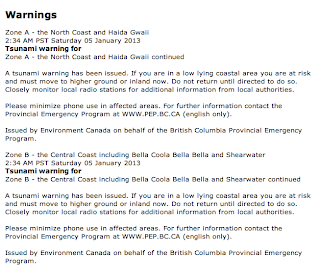 Much like the Haida Gwaii quake of October, Prince Rupert RCMP and Prince Rupert Fire/Rescue began to block off roads leading to the waterfront areas and by 1:45 am had begun to advise residents of the Beach and Water streets of the Tsunami warning that had been in effect. Members were also checking on boats in local marinas and along docks to advise that a tsunami had been generated.

An update from Emergency Information British Columbia issued at 2:45 AM advised local governments in the affected areas to activate their emergency plans and immediately begin evacuation of identified areas at risk for tsunami impacts.

At 2:30 the Tsunami warning for regions of Coastal Southern British Columbia were lifted.

However Prince Rupert and northern areas of British Columbia and Alaska remained under the Tsunami Warning, though in an advisory from the Pacific Tsunami Warning centre, the advice for local officials was that if a damaging wave had not arrived within 2 hours of the seismic event, then the threat period most likely had passed.

At 310 AM the Tsunami Warning for the Northern portion of British Columbia was cancelled.

Unlike the Haida Gwaii quake of October, which generated much in the way of media attention.  News media reports of the Saturday morning earthquake and tsunami warnings were less than brisk, major news websites out of Vancouver had little to no information on the event by 3 AM, though there was cursory information on the CBC website and from the CKNW radio website.

Locally CFTK-TV had frequent updates posted on their website through the period of the seismic event.

You can review many of our seismic events over the last year from our North Coast Review archives.
Posted by . at 1:23 AM