The NDP on the North Coast gathered at Prince Rupert's Fisherman's Hall on Saturday, set to select the person to carry their banner into the next provincial election this May.

The news first delivered via Gary Coons twitter feed, which congratulated both candidates on their campaign and provided a number of photos of the days developments. 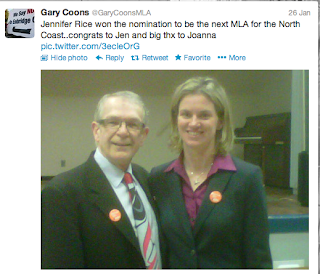 CFTK Television's website broke down the vote count as 180 in favour of Rice, with 116 votes case in favour of Larson.

The victory by the Prince Rupert City Councilor could be perceived as a bit of an upset, heading into the final week of the nomination battle, the leadership of the union movement in the city seemed to be firmly in the camp of Ms. Larson/

As we outlined earlier this month, endorsements offered to Ms. Larson's campaign. compared to those of Ms. Rice, were heavily weighted towards the labour leaders and more established members of the NDP of the north coast.

A trend that continued on into the last week of the nomination campaign, with one time Prince Rupert Mayoralty candidate Gloria Rendell throwing her support behind Ms. Larson.

Yet, at the end of the balloting it is clear now that it was the campaign of Ms. Rice that seemed to resonate the most with the local NDP membership, less controversial in nature and more inclined towards the environmental issues, her approach to the contest proved to be the more successful as the final push played out into Saturday.

Next up for the Councillor, a decision as to her status on Prince Rupert City Council and then the preparations for a provincial election campaign, with the poll results of late suggesting the very real possibility that the party she represents will form the next government.

Ms. Rice is the first declared candidate in that provincial campaign to come, the Liberals have yet to nominate a candidate for the North Coast, nor have the BC Conservatives or Green party.

Considering the environmental passions of the new NDP nominee, one would imagine that the Green party will be sitting things out on the North coast when May rolls around.

You can examine items of note moving forward in the campaign and those from the past at the Legislature from our archive page.