Warmest in the land 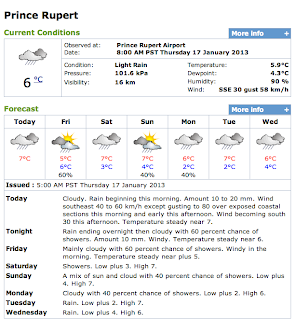 The bragging rights won't last for long, but for the next few days the North Coast (coastal section) and Haida Gwaii will be the nation's hot spots on the weather map

While eastern locales deal with cold, snow, sleet and all of that, Prince Rupert will be in the midst of a pacific frontal system that brings in the rain yes, but with very warm temperatures. 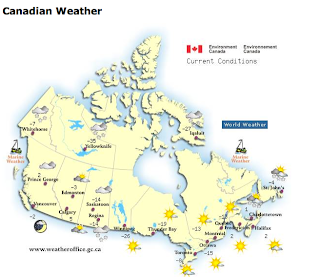 A quick look at some of the temperature reports for the day see Saskatoon -14, Winnipeg at -26, not surprisingly -35 in Yellowknife, Toronto -8, Ottawa -15.

Only Calgary seems to want to challenge us for the day, the high anticipated in southern Alberta is +5.

The forecast high for Prince Rupert today is +7 degrees, a pattern that for the most part will continue on through the weekend.

And for those with relatives down on Vancouver Island or in Vancouver, who make those frequent facebook posts, twitter reports and phone calls about how nice the weather is today.

The forecast high for Vancouver today is +4, Victoria +5, though to give them their due for all that effort, they do have sunshine, so we'll probably have to share those bragging rights.
Posted by . at 8:48 AM

Email ThisBlogThis!Share to TwitterShare to FacebookShare to Pinterest
Labels: Warm weather in January on the North Coast July 17 2013