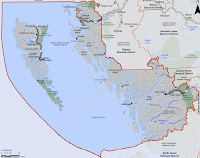 The mail in ballots most likely are on their way, the in person balloting is set for Saturday, January 26th in Prince Rupert, the day that the New Democratic Party of British Columbia will choose their nominee for the next provincial election set to take place May 14th.

The nomination race on the North Coast has been rather low profile in the local media, a story here or there from time to time, featuring some notes on the campaign of the Prince Rupert Teachers Union President Joanna Larson or City Councillor Jennifer Rice.

But for the most part the politicking has been mostly the thing of being visible in the community, attending the odd social event around the North Coast and posting tweets and Facebook notes to the assorted pages.

If anyone is talking about the nomination race, they're keeping it pretty well among themselves and their friends.

Even the NDP seems less than inclined to keep anyone up to date on events, offering up little in the way of information about the riding or the candidates which would like the chance to represent its voters.

If nothing else, perhaps with the nomination secured, the successful candidate on the North Coast might be able to provide some content to the NDP website other than pictures of the leader Adrian Dix.

We reviewed the endorsement parade within the North Coast NDP earlier this month, Saturday will be the day that the work of those that put their support behind either Joanna Larson or Jennifer Rice will find out if they swayed enough votes to their candidate.

The QCI Observer had this review of the final days in the race to seek Gary Coon's seat at the Legislature, in addition to the look at the NDP race, the Observer reminds us that the Liberals are still seeking their own candidate for the upcoming election, a process that thus far hasn't delivered much in the way of names anxious to seek the challenge of taking the NDP on, in one of their more secure ridings.

Larson or Rice? We find out who gains the nomination Saturday Afternoon at 1:30.

You can review some of the coverage of the nomination process, as well as items from Victoria from our Legislature archive page.

Email ThisBlogThis!Share to TwitterShare to FacebookShare to Pinterest
Labels: Final week in the NDP nomination race for the North Coast