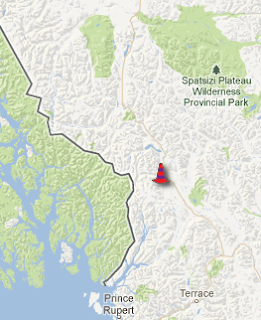 Winter driving conditions and Avalanche control are making for a slow path north of Terrace this afternoon, as a number of travel notices have been issued by Drive BC for the Highway leading north of the city.

The notices began with an advisory that  with Rain on compact snow on Highway 37 North, driving conditions were considered troublesome, with a recommendation to exercise caution and/or consider alternate plans.

That was followed up reports that delays of up to two hours could be expected as Avalanche control crews worked on a stretch from Stewart to Meziadin Junction.

Things appear to go from bad to worse as the afternoon moved on, with the Highway reduced to single lane traffic owing to a vehcile recovery effort 1 kilometre south of the Stikine River Bridge.

Updates can be accessed from the Drive BC website
Posted by . at 2:51 PM