Some things don't work so well in the shade 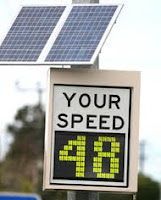 The Mayor mentioned it in passing at the most recent City Council meeting, an explanation of sorts as to why the recently installed Speed indicator sign located across from the Civic Centre just past the Hays Creek Bridge doesn't seem to work very often.

The digital display when it worked, would provide a reminder to motorists as to their speed heading into the city and for most it seemed the need to slow down heading into the more populated areas.

Turns out, and we know this will surprise a few folks, but the solar power technology apparently doesn't work all that well in that location, perhaps owing to our frequent overcast skies, but we're not solar scientists.

According to the Mayor's update, the Ministry of Transportation is currently seeking to solve the conundrum, using an alternative power source, the options of which we are sure will be limitless.

Speaking of limits, for the moment, speed limits should be best observed the old fashioned way, by perhaps easing it up a notch on the accelerator as you enter the city.
Posted by . at 1:11 PM