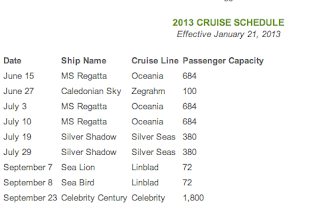 On Monday, the Port of Prince Rupert revealed the listing of the cruise ships set to make nine port calls in Prince Rupert for 2013. And while the volume of visits of some years past is still a memory, the opportunity to continue to place Prince Rupert back on the map in a number of niche markets, seems there for the taking.

Details for the upcoming season were outlined in a News release from the Port Authority and highlight the work that continues on in the community to bring back a vibrant cruise industry.

A process that obviously takes time, both in building relationships with the various cruise lines; as well as in the community seeking to find the right mix of attractions and services that cruise lines and passengers are looking for these days.

Of note for this year will be the variety in size of the vessels making a port call.

Included in this years vessel call list are the small pocket cruise types of vessels, this year in the form of the National Geographic  Expeditions on the Sea Lion and Sea Bird, vessels which hold 72 passengers, and will call on Prince Rupert on September 7th and 8th.

From that end of the cruise spectrum, we shift to the largest of the vessels to arrive this year. As Prince Rupert plays host to the Celebrity Century, which hosts some 1,800 passengers and will bring an end to the season  on September 23rd.

As well this year Prince Rupert will see visits from the MS Regatta three times (June 15, July 3 and July 19), The Caledonian Sky on June 27th and the Silver Shadow which will arrive on July 19th and 29th.

And while the list is about the present, the focus is on the future for proponents of the cruise industry in the city.

The Port makes mention in their news release of the potential for the community moving forward with a focus on the Central Waterfront Development plan that they visualize to revitalize the Cow Bay area, the district which has become the central point for the cruise tourism sector in the community. 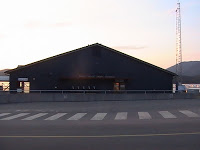 The work of the City's Cruise Task Force continues as well into 2013, with its goal of keeping Prince Rupert on the cruise ship agenda, hoping to build on last years efforts which saw many community members volunteering their time and offering their assistance in providing a welcome to visitors.

It was one of the key aspects of last year's work that earned the community praise and offered up some opportunity to review what did and didn't work last year, with an eye to improving the experience for visitors in 2013.

Those work of the Task Force may find a few additions on the to do list this year as well, at the City Council session of  October 22nd, the Mayor indicated that he would like to further enhance the presence of Prince Rupert in the small cruise ship market, hoping to better utilize the Prince Rupert Airport in the process.

As we outlined in December, Prince Rupert's cruise ambitions are still in the incubation phase, compared to the massive presence that the industry has just a few hours north in Ketchikan, Alaska.

A location that has been home to the cruise industry for decades and has built up much of the infrastructure to service it in a fashion that the cruise lines make use of, it's into that environment that the Rupert efforts will seek to find their niche.

The planning continues on through the winter and into the spring, the finished product and chance to showcase our experience starts up on June 15th.

Notes on Cruise related items can be found from our archives.