Verdict in Epicurean trial comes in 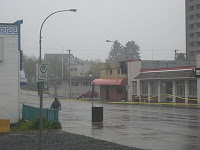 It's been almost three years since the building that once housed the Epicurean restaurant burned down, as it took place on one of the main downtown streets of the city, it was one of the more memorable of fires in recent Prince Rupert history.

It was in the early hours of Friday morning of April 30th, 2010 that the Prince Rupert Fire Rescue Department was called to the major blaze, a blaze which destroyed the long since empty bottom floor restaurant space, as well as the apartments that were above it.

The call first came in to the Prince Rupert Fire Department at 2 am, after two hours of battling the flames the Fire Department had it under control and extinguished shortly after four. However, there was severe damage to the structure and eventually it would be torn down.

While there were a few injuries,  there were fortunately no fatalities from the blaze that morning, though the residents would soon have to find other accommodations, forced from their homes by the events of that morning.

From that morning further investigation led to charges being laid and a court trial began in the fall of 2012.

That court case reached a resolution at the Prince Rupert court house this week.

A verdict was handed down in court on Thursday,  the next phase of the proceedings is a pre sentence report which is now being conducted, set to be reviewed in court on May 6th when sentencing will be delivered.

CFTK had full coverage of the court decision and some background on the fire and trial, with reports here and here (video)