While fans of the Prince Rupert Rampage are no doubt quite disappointed that the team's 2012-13 season is now in the books, no one was disappointed at the result of their on ice efforts when it came to helping the Salvation Army.

As part of the final Rampage game of the season on Saturday night, a cheque presentation was made to the Salvation Army, as the Port of Prince Rupert provided 100 dollars a goal, based on the number of goals scored by the Rampage at home games this season.

At Games end the Rampage issued a tweet on their Twitter feed, providing the final number of a $3100 donation to the Salvation Army. 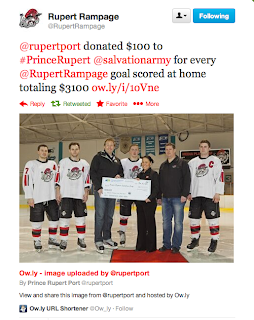 In addition to the support to the Salvation Army, the Port of Prince Rupert also provided assistance to the Rampage Hockey Club as title sponsor for the team this season.

The Port reviewed their participation in the program this year as part of a News Release, as well as providing this photo of the cheque presentation ceremony.

Saturday marked the end of the Rampage season, with the home side on the short end of a 6-5 shoot out final to the visiting Omenica Ice.

The 2012-13 season provided more than a few challenges placed at the skates of the team.

From ice troubles at the start of the season at the Civic Centre that required an extended road trip to start the season; to a roster with a reduced number of veterans this year and the need to press a number of rookies into action quickly.

The learning curve proved to be rather steep, but towards the end of the season it appeared that the Rampage had turned a corner, setting the stage for last weekends exciting back to back games that settled the playoff picture for this year.

The Rampage will now set their sights on the 2013-14 season, with some of their younger players having gained some valuable experience over the last few months, the road ahead will be a little less challenging than this one provided for.

You can review the Rampage season from our archive page other notes on the CIHL can be found here.