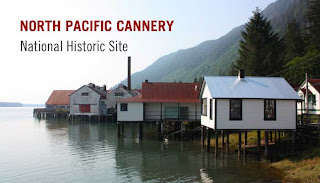 An announcement on Friday from the Federal Government heralded the arrival of Federal money, by way of reimbursement in a cost sharing agreement, towards a much anticipated renovation project at Port Edward's North Pacific Cannery Historical site.


“This new funding will ensure the preservation of Port Edward’s treasured national historic site and will foster increased understanding and appreciation of those who contributed to the development of the West Coast fishing industry while continuing to support local tourism.” -- James Moore, Minister of Canadian Heritage, announcing the contribution of up to 100,000 dollars to support conservation work at North Pacific Cannery Museum.


The Federal Government's funding, ($100,000) reimburses the Port Edward Historical Society towards their renovations on a number of projects at the popular tourist destination on the North Coast, including work on the reduction plant, reduction tank platform and the working dock.

The structures in question were at risk of collapse and could have potentially damaged other heritage structures that are nearby.

The efforts at the projected  200, 000 dollar renovation project have been ongoing at the North Pacific Cannery Historical site since the fall and are designed to stabilize the structures until further conservation work can be conducted and will also allow for potential access to a part of the site that had been closed off.

The full press release of Friday can be found here, as well as some background on the Historical site from the Parks Canada website (here)

As well, the Northern View featured some of the local reaction to the announcement, posted to their website on Sunday.

You can learn more about the North Pacific Cannery National Historic Site from their website.
Posted by . at 9:23 AM