Frank Slubowski for the Hobey! 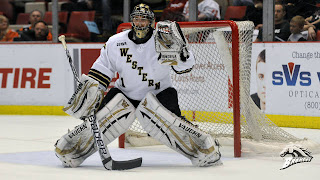 There has been a push of late locally, to help the cause of a former player in the PRMHA make it to the top of the NCAA hockey rankings in the USA.

Frank Slubowski, a goaltender who gained his start in the local Prince Rupert Minor Hockey Association, currently plays US College hockey for the University of Western Michigan Broncos, and now finds himself in the running for nomination for the prestigious Hobey Baker Award, symbolic of excellence in US college hockey.

And while Slubowski has already received a number of accolades from US College hockey, the Hobey Baker buzz is a whole different level of recognition for him.

The Hobey Baker Award is one of the most coveted of awards in US college sports, previous winners have included such well know hockey figures as Brendan Morrison, Paul Kariya, Neal Broten and Ryan Miller to name a few.

Last year's recipient was Andy Miele, who signed with the Phoenix Coyotes.

The first two phases of nomination for the award include online balloting, the first phase of which has been going on since January 7th.

You can learn more about the Hobey Baker Award balloting from this link,  and make your vote count here, the deadline for balloting in this first phase ends on March 10th.

At that point the second phase will begin with the Top Ten finalists names being announced and a second round of voting will take place.

For those looking for up to the minute updates on developments with he Hobey Baker competition you can check their twitter feed .

The success of Slubowski marks the second item of note from a PRMHA alumnus, earlier this month we recounted the debut of Devon Oakes who took his first shift in the WHL with the Kamloops Blazers.

You can look over some of our other PRMHA notes from our archive page.
Posted by . at 9:53 AM