Six month trial ahead in Queen of the North Sinking 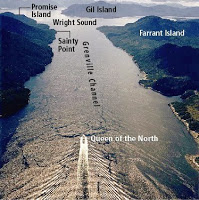 Almost seven years after the BC Ferry Queen of the North sank off of Gil Island, the jury has been selected and proceedings are set to move forward in the trial of a former B. C. Ferries Officer, who has been charged in the deaths of two ferry passengers.

The Queen of the North sank on March 22nd of 2006, after departing Prince Rupert bound for Port Hardy. The vessel striking Gil Island shortly after the midnight hour and though there were heroic efforts from residents of Hartley Bay to rescue passengers, two of those on the journey that night, Shirley Rossette and Gerald Foisy, were reported missing and unaccounted for.

Karl Ligert, the fourth officer on board the Queen of the North that night has entered a plea of not guilty, to two counts of criminal negligence causing death.

Ligert, who was responsible for navigation of the vessel on that watch, was on the bridge with quartermaster Karen Bricker when the vessel hit the Island and subsequently sunk.

Jury instructions were issued by B. C. Supreme Court Madam Justice Sunni Stromberg-Stein, advising those chose for the jury panel that "every juror must be impartial, which means that every juror must approach the trial with an open mind and without preconceived ideas."

Considering the massive media exposure of the incident at the time and over the last six years that will be a very important balance for the jurors that have been selected to carry with them into the courtroom.

The trial is estimated to take run for at least six months.

Some background on the upcoming trial can be found below.

Email ThisBlogThis!Share to TwitterShare to FacebookShare to Pinterest
Labels: Queen of the North trial