Residents of the Northwest, like those in other parts of Canada will have to wait just a little bit longer to learn if their community will be a WestJet Encore destination.

The Calgary based airline has delayed its much anticipated announcement that will outline where its new airline will fly.

It was thought that the airline would be announcing its proposed destination list in January, however, this short burst of information on twitter offers up a hint as to the timeline ahead. 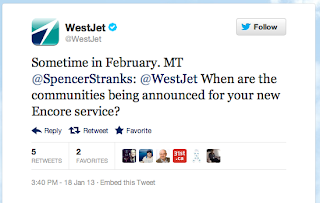 As well, reports from  some would be destinations advise that the planned roll out of the airlines timetable will be delayed into February.

While they work out the first stops on the route map, the work to get the airline up and running by the second quarter of 2013 continues on.

The prospect of a new air carrier, one that could redefine the pricing structure for air travel in the country had airport authority reps lined up outside WestJet's Calgary offices.

As we recounted last year, Prince Rupert and Terrace Airport officials were among those of many Canadian communities that made a pitch to play host to West Jet Encore, offering up what they believe were the best selling points for their community.

They'll have to wait until February now to find out if their efforts have paid off, perhaps WestJet is aiming for a Valentine's Day announcement for Canadian air travellers, sending valentines to their favoured communities by mid month.

We have more on air travel in the Northwest on our archive page.
Posted by . at 9:02 AM