More discord between Union and School Board?

Prince Rupert may soon be in store for a replay of the battle of wills between the local teachers union membership and the School Board, something last seen in the great "Yertle the Turtle debate" of last year. 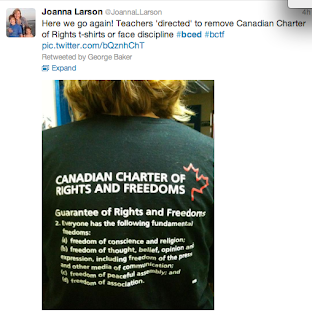 Rumblings along the world of twitter through the day today have it that a bit of a kerfuffle has evolved in the local schools over the wearing of  t-shirts, one which features a passage from the  Charter of Rights and Freedoms from the Canadian Constitution.

The section in question is section 2, which guarantees Rights and Freedoms for those studying their Canadian constitution handbook at home.

The main thrust of the discussion it seems is, that according to the PRDTU President Joanna Larson, the t shirts were deemed one of a political message of sorts and a request we gather was made that they be removed from the school(s) in question.

That at least are the details the Vancouver Sun has discovered after conversations with both sides.

From there, the discussion has moved onto the social networks with much in the way of examination of what is and is not considered a political statement and what is considered the expression of free speech.

For those that wish to follow along with the theme, the twitter feed #bctf perhaps offers the best starting point to try and make sense of all of today's developments.

So far, there have been no public press releases put forward to the media from either side, short of the item now published in the Sun, and the flurry of activity on the social network of the day and all of that was from the BCTF perspective.

So for now it appears to be an internal thing at the local level, though judging by the tone of some of the discussion of Monday, there is the possibility that it may spawn further such displays across the province and perhaps into another province.

Some of the twitter reaction of Monday came from Ontario, which is currently embroiled in their own labour troubles in education and were seeking out information on how to show their support.

More of the mystery of the latest dispute between School District 52 and the local membership of the PRDTU may be revealed tomorrow morning on CBC Radio's Daybreak North. Prince Rupert based producer/researcher George Baker seems to suggests as much with his own contribution to the twitter debate today. An indication that perhaps a report is planned for 7:15 on the morning news program.

This latest local brush fire comes as things appeared to have settled down over the last year or so in the wake of last years dispute between the BCTF and the Ministry of Education.

Prior to today's discussion point, the education dispute of the previous year had given all the appearances of being in a bit of a holding pattern, set to remain that way it seemed until the next provincial election in May is out of the way.

Though it does seem that Prince Rupert always has local issues that flare up on occasion, most recently the PRDTU expressed their concern over the ongoing use of consultants in the School District.

It has been an ongoing issue of their concern going back a few years now.

Today's dispute, could provide much of the same kind of coverage that last years Yertle the Turtle did, which again saw the topic of political statements and their place within the School District explored, gaining a fair amount of attention to the local dispute on the national level.

The t-shirt dispute it would seem may be in that same kind of category and most likely we will be hearing much more about it over the next little while.

CBC featured the controversy on the Tuesday morning edition of Daybreak North, audio of the report which featured both School District Superintendent Lynn Hauptman and PRDTU President Joanna Larson can be found here.

Georgia Straight-- Don't go wearing the charter on your back in Prince Rupert schools
Posted by . at 8:23 PM

Email ThisBlogThis!Share to TwitterShare to FacebookShare to Pinterest
Labels: A controversial t shirt at SD52, labour kerfuffle at SD52