Depending on how one parses the word prudent, an announcement from today by the BG Group could offer up a variety of outcomes for the Prince Rupert LNG project, proposed for Ridley Island,

As part of their third quarter financial statement for the end of October, BG outlined the state of its world wide reach on Tuesday, highlighting the future for their Canadian plans with this short observation.

Canada BG Group continues to investigate the best way to advance the Prince Rupert LNG project. However, given current uncertainty about the size and number of North American projects, BG Group is taking a prudent approach to development in Canada by moderating future expenditure.

The words of caution, come after reports in the financial press of a significant decline in profits for the British company.

As stated in their media release (full version can be found here) , there is a fair bit of uncertainty on the number of North American projects and in recent weeks, much has been made about the nature of the financial returns, as markets decline and the energy giants seek more concessions and tax relief from the different levels of government.

The British Columbia in particular has been feeling some of those pressures, as highlighted by the Provincial Liberal's recent tax regime announcement which set the taxation level significantly lower than previously anticipated.

And still, even with those concessions, one of the leading prospects for LNG development on the North Coast is now taking a prudent approach to development in Canada. A term that might suggest that BG will be slowing down it's plans and taking stock of the prospects moving forward.

No word of the plan for the future has been outlined on the local Prince Rupert LNG website as of yet.

The first alert for British Columbians on the announcement came through the twitter feed of the Globe and Mail's Brent Jang, who reviewed the news out London. 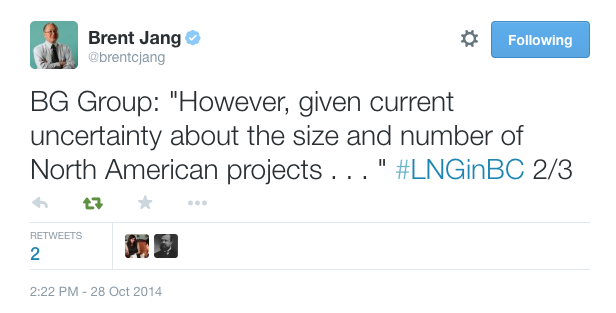 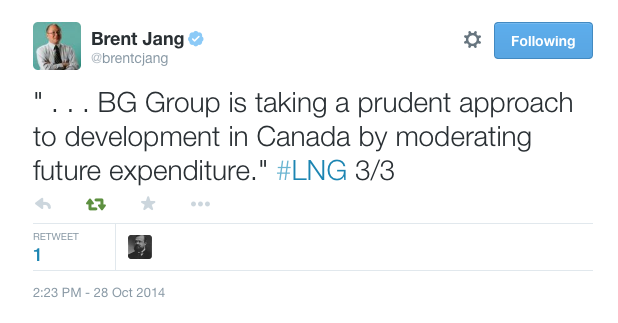 Today's announcement from the BG Group provides a glimpse for locals as to how developments in far off locations can change very quickly and have an immediate impact on industrial plans for the North Coast.

Update:  Various Financial News Services across Canada have started to reveal more of what may lay ahead for the Prince Rupert LNG project, some of their items can be found below:

For the latest items related to the Prince Rupert LNG project see our updated item of October 29 here.
Posted by . at 2:55 PM

Email ThisBlogThis!Share to TwitterShare to FacebookShare to Pinterest
Labels: BG Group to take a prudent approach to LNG development.