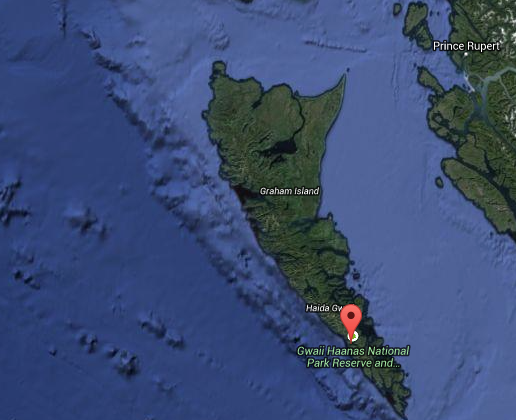 The weather system that is currently battering Haida Gwaii and some portions of the North and Central Coasts, is proving to be a troublesome thing for marine interests off shore.

Friday morning the first reports of a vessel adrift off the shore of Haida Gwaii began to filter across the news services of the province.

With the CBC's Carolina de Ryk and George Baker taking to their twitter feeds to provide the first of the local accounts of the 135 metre container ship's troubles.

The Russian container vessel Simushir  lost power in the early hours of Friday and is currently adrift 19 km west of Gowgaia Bay.

It's last port of call reportedly was Port Angeles, Washington.  The vessel tracking site vessel finder offers up this snapshot of the vessel


The Council of Haida Nation posted to their Facebook page an expansive update on the dire situation facing the ship. 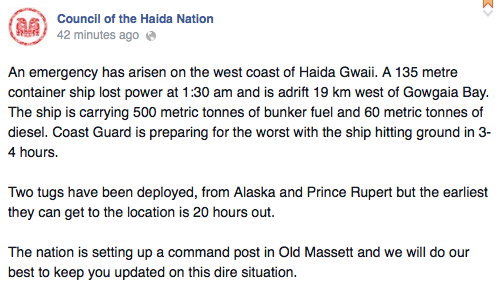 The Council of the Haida Nation has set up a command post at Old Masset.

Tugs have been dispatched from Alaska and Prince Rupert to attend to the situation, but weather is certainly an issue with near hurricane winds and heavy seas leaving assistance at least 20 hours away.

The Prince Rupert Port Authority provided some helpful information as the morning moved into afternoon, outlining the nature of the size of the vessel in distress at the moment compared to those that call on Prince Rupert's Fairview Terminal.

As well, the Council of the Haida Nation have updated their information flow on the incident, providing this Press release on the situation.

North Coast MLA Jennifer Rice, who also represents Haida Gwaii at the Legislature offered up what appears to be her first official comment on the situation, a short observation on the incident as part of her twitter feed today. 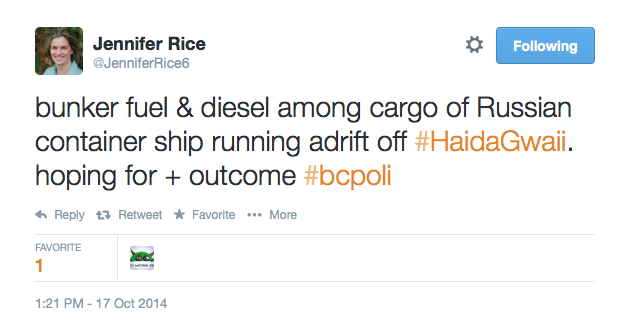 Global BC outlines that a planned press conference on the situation will take place at 3:30 this afternoon.

8:30 PM --  The Council of the Haida Nation has provided another update on the efforts off shore of Haida Gwaii. Outlining the news that the Canadian Coast Guard vessel Gordon Reid had secured a tow line onto the Simushir and was slowly towing the stricken vessel away from the Haida Gwaii shore.

The Gordon Reid will await the arrival of the CCGS Wilfrid Laurier in the early hours of Saturday, with the plan then apparently to bring the Russian vessel to Prince Rupert.

Weather however continues to be a factor with a strong pacific system expected to arrive in the region at that same time.

9:30 PM-- Our updated article on the latest developments off the coast of Haida Gwaii can be reviewed here.

We'll offer further updates on the situation from various media services below, as we learn more about developments.

Sunday afternoon the Prince Rupert Port Authority outlined through twitter the plan ahead for the stricken vessel, which will be berthed at the North end of the dock at Fairview Terminal sometime in the early morning period Monday.

We offered up some background on the newest guest in Prince Rupert harbour with this item.

As well, the Prince Rupert Port Authority has posted a number of photos of the vessel as it arrived in Prince Rupert Monday morning (see here)

Maritime Forces Pacific-- Statement and photos from the Navy regarding the transit of the Simushir
Council of the Haida Nation-- Statement for Sunday October 19 1:40 PM
Tass News Service-- Russian Simushir freighter to be towed to shelter port by morning Oct 20
CBC-- Simushir under tow from Barbara Foss en route to Prince Rupert for repairs