Did Minister Stone lose his roadmap? 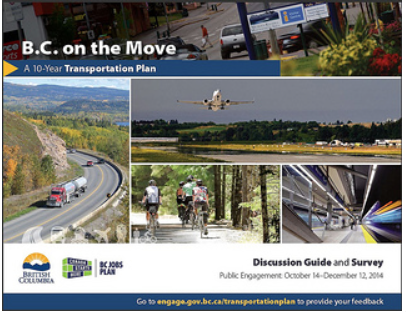 British Columbia's Transportation Minister Todd Stone was in the Northwest last week, a short journey to encourage residents of Terrace and Kitimat to become engaged in the province's B. C. on the Move consultation sessions, which have a deadline of December 12th.

Making good use of his stop over in the region, Mr. Stone also took some time out of that promotional tour to listen to the concerns of the Mayor and Council of Terrace and Kitimat.

Engaging  in what appears to have been a wide ranging conversation on such topics as infrastructure and other local issues, with a key concern the need for an overpass for the Terrace area.

Mr. Stone also offered up some thoughts on development after a discussion of some of the issues related to the  Terrace-Kitimat airport.

The Transportation Minister also provided an update of sorts on a long running issue in the region, as he advised that an announcement on the much discussed Highway Shuttle between communities of Highway 16 is coming soon.

That shuttle proposal was one of the key aspects of Wally Oppal's Missing Women's Commission of 2012 and has been a concern of North Coast MLA Jennifer Rice since it was first introduced during the commission hearings.

All of those points of course make for good news for the region, addressing a major social concern such as the highway shuttle and giving an ear to Terrace and Kitimat over their infrastructure issues is what a Transportation Minister should do.

Such was the success of his tour of Terrace and Kitimat, that the Minister was quick to his twitter feed last week, anxious to share some of the events of his discussions with representatives there.


Those twitter feed bursts from Mr. Stone, showcased the nature of all that consultation and the apparently good working relationship that he currently enjoys with those communities.

However, we can't help but notice that there's a certain community and its local leaders  towards the west who seem missing from all that twitter excitement.

Now we wonder,  perhaps Mr. Stone forgot to program the GPS in the car, or if he's an old school kind of guy, maybe he forgot to pack a road map.

Not that anyone would need one mind you to travel from Terrace to Prince Rupert, really it's a matter of hopping in the car and heading west on Highway 16 for about ninety minutes or so, less if the Minister has a lead foot.

Whatever the case, it does seem that his recent trip to the Northwest did not include a stop in Prince Rupert,  which has just as many, if not more, infrastructure problems to deal with as those in other communities.

There was no conversation with our Council, no photo op with the Mayor, no chance to discuss pressing concerns with local residents. For whatever reason, Mr. Stone chose not make that 90 minute drive to see for himself, some of the issues of importance to the western side of the Northwest region.

Maybe it was a time constraint problem, maybe it was just a case of poor planning.

Then again, maybe he just didn't want to meet with the Prince Rupert crew at this time.

During the Mayor's review of the September sessions of UBCM, some of our City Council members outlined how they were disappointed and in some cases sickened, with the response of the Provincial government on any number of issues from that convention.

Leaving an impression for many, that discussions didn't seem to go so well at Whistler last month.

You can review some of those observations, by way of our City Council Timeline for the October 7th, the UBCM commentary comes up through a number of topics from that session.

So, with all of that as a bit of background to the current atmosphere between the City and Province. Maybe in this case, two weeks just wasn't enough of a break from Mr. Stone's old pals of the Prince Rupert delegation.

Leaving Prince Rupert off of last week's travel agenda could however find some traction in the current municipal election campaign, adding to what is becoming an ongoing narrative for the need for better relationships with other levels of government.

Still, the purpose of his trip to part of the Northwest does appear to have been that of selling the merits of the consolation process for the BC on the Move program.

It's just a thought, but it seems like it's hard to engage in a consultation, if the Minister in charge of the program doesn't make the travel the extra few miles down one of his highways in an effort to consult...

Some of the reviews of Mr. Stones tour to Terrace and Kitimat can be found below: